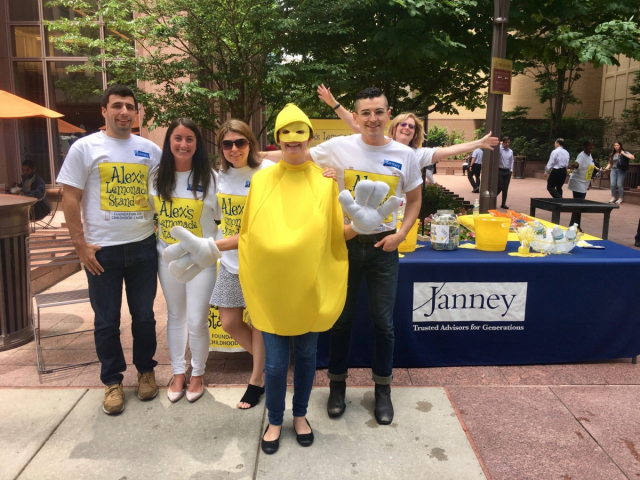 Inspired to give back to the community and help in the fight against childhood cancer, employees at Janney Montgomery Scott have been hosting lemonade stands during Lemonade Days for 11 years. The month of June has become a staple in their company culture as they have fully embraced Alex’s mission.

They call it a firm-wide initiative, where the enthusiastic employees do more than hold a lemonade stand. They have fundraisers such as Denim Day, Hot Dog Day, Gift Basket raffles, and sell paper lemon cutouts. But for those just looking for a nice cup of lemonade, supporters will find the lemonade stand year after year outside their company headquarters in Center City, Philadelphia on a Friday afternoon.

“Lemonade Days provides an opportunity to connect with colleagues in different departments and rally together behind a great cause!” said Carlos, an employee at Janney Montgomery Scott.

Carlos’s Tip to Stand Hosts: “Go into it with all your heart! Don't be nervous or shy, as Alex's Lemonade is so well known that you'll be surprised to see how many random acts of kindness will come your way. Also, have fun with it! It's OK to be silly too, every year we have a volunteer dress up in a lemon suit.”