In its final year, Striking Out Childhood Cancer bowled a perfect game. With a record-breaking fundraising total, it raised enough to fund a full Young Investigator Grant. The event will make a huge difference for kids fighting cancer by supporting promising projects that could offer a breakthrough.

The bowling tournament kicked off the day with all 40 bowling lanes full, and fun for all the supporters and childhood cancer hero families in attendance. Next, everyone moved to the Elks Lodge to bid on beautiful silent auction items and enjoy a delicious dinner followed by a thrilling live auction to close the festivities.

The event was in celebration of what would have been childhood cancer hero C.J. Banaszek’s 18th birthday, and there was no shortage of special moments throughout the day. Whether it was his sister’s touching words about their relationship, or when his best friend presented C.J.’s family with the tassel of his graduating high school class, or when the audience gave a standing ovation to the ALSF-funded researchers who attended to express support, everyone came together for one common cause: finding cures for children with cancer. 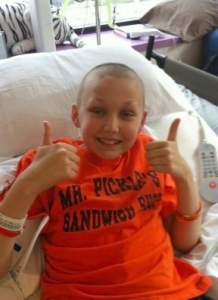 C.J. was a warm, happy and popular boy. He was quiet, yet he was a powerful leader with a magnetism that drew in kids and adults alike. He had a way of making everyone around him feel good about themselves.

C.J. was 11 years old when he had a nosebleed that wouldn't stop. His mom took him to the emergency room, where a doctor with a hunch took a blood test that revealed that C.J. had chronic mylogenous leukemia. After he was diagnosed, C.J. had a successful bone marrow transplant, but he relapsed two months later.  He went on to have two more transplants and spent eight and a half months in the hospital.

He finally defeated his leukemia, but passed away in July of 2014 from a fungal infection acquired during treatment.

C.J.’s mom, Heather, hopes that leukemia treatments improve so that no child has to go through a bone marrow transplant, and, of course, that there can be a cure for cancer. She advises other parents whose children have recently received a cancer diagnosis to “stay positive and take it one day at a time. Be like Dory from Finding Nemo and ‘just keep swimming.’” C.J. faced his illness with incredible strength, a smile on his face and a sense of humor. He fought an epic battle and continued to be concerned for the wellbeing of those around him.

His mother has become involved with ALSF in order to help other children affected by cancer and honor C.J.’s life. Hero Quote: "I am a warrior. I've been fighting leukemia for over a year and I haven't given up, lost my sense of hope or humor, or my smile." –C.J. Banaszek.