To identify the type of tumor, a sample of the tumor is obtained during surgery (biopsy or tumor removal). Then, a pathologist (a doctor who specializes in examining body tissues) looks at one or more pieces of the tumor under a microscope. Unfortunately, it can be difficult to classify some brain tumors. Different pathologists may look at the same tumor sample and give it a different name. Sometimes it is necessary to have several neuropathologists examine the tumor samples before a diagnosis can be reached. This process can be very frustrating and confusing for parents.

The terms malignant and benign are confusing when applied to many brain and spinal cord tumors. All fast-growing tumors are considered malignant. Even if entirely removed with surgery, these tumors will usually grow back unless a child undergoes further treatment such as radiation and/or chemotherapy. Thus, the terms “malignant,” “fast-growing,” or “cancer” usually mean the same thing when used to describe fast-growing brain and spinal cord tumors.

Slow-growing tumors (also called low-grade tumors) are technically classified as benign. If these tumors are totally removed with surgery, they rarely regrow. Many slow-growing tumors, however, are found deep within the brain or brainstem, where aggressive surgery is not possible. In these cases, other treatments (like chemotherapy and/ or radiation) are used in an attempt to shrink or halt further tumor growth. Therefore, even if a tumor deep in the brain is slow-growing, it may require the same treatments as malignant brain tumors—and these treatments can cause the same long-term side effects. Some healthcare providers call benign tumors that are deep in the brain “malignant by location.”

In this book, tumors are referred to as fast-growing or slow-growing. However, one must also consider the location of the tumor to understand the symptoms, likelihood of successful treatment, and possibility of late effects.

A discussion of the specific tumor types (in alphabetical order) follows.

Astrocytomas (also called gliomas) are the most common type of brain and spinal cord tumor in children. They develop from brain cells called astrocytes. They can be slow-growing or very fast-growing and can arise anywhere in the brain or spinal cord. About 80 percent of astrocytomas are slow-growing.

Common names of slow-growing astrocytomas or gliomas include:

Slow-growing astrocytomas in the spine: Slow-growing astrocytomas account for 75 percent of all spinal cord tumors in children. Surgery is the primary treatment, but it is usually not possible to remove all of the tumor. Multiple surgical procedures are generally needed if the tumor regrows. Radiation therapy is used for tumors that grow despite multiple surgeries. Chemotherapy is not usually given to children with slow-growing spinal cord tumors, so its effectiveness is unknown.

Atypical teratoid/rhabdoid tumors (AT/RTs) are fast-growing and occur most often in children younger than age 2. They account for less than 2 percent of all childhood brain tumors. They can be found anywhere in the brain, and they can quickly spread throughout the brain and spinal cord. 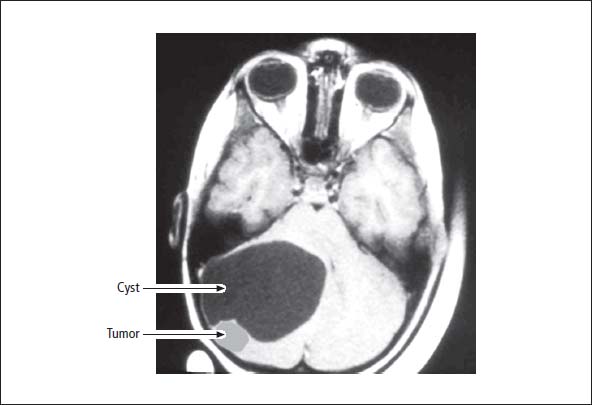 Figure 3–1: MRI showing astrocytoma with associated cyst in the cerebellum

Treatment generally involves surgical removal of the tumor and then cycles of high-dose chemotherapy, each followed by a stem cell transplant (called tandem transplants). Radiation therapy may also be used.

Astrocytomas that grow in the brainstem are called brainstem gliomas. They make up 10 to 15 percent of all pediatric brain tumors. Ninety percent of these tumors are fast-growing and cause rapidly developing symptoms. They usually involve the pons (also known as pontine gliomas) and have a diffuse appearance on the MRI scan. Radiation therapy, sometimes with chemotherapy, is the treatment for brainstem gliomas. Surgery is not a treatment option because aggressive surgery in the brainstem is life-threatening and results in severe neurological impairment. 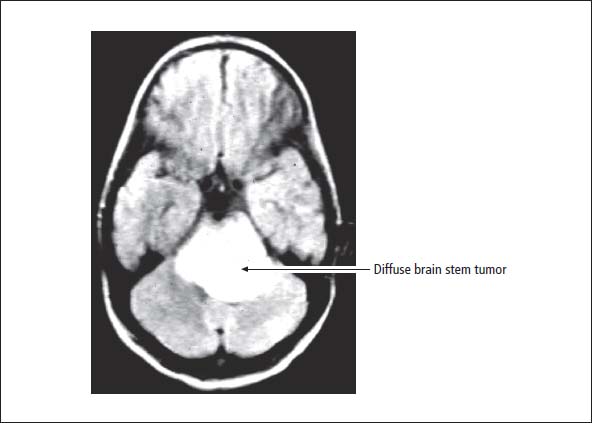 About 10 percent of brainstem tumors are slow-growing brainstem gliomas. They usually are located in the medulla, and symptoms develop over a long period of time. Treatment generally involves radiation and observation. Surgery is not typically an option.

Craniopharyngiomas grow in the area of the brain that contains the hypothalamus, pituitary, and optic chiasm (called the supraseller region). They account for approximately 5 to 10 percent of all childhood brain tumors. Treatment is controversial because aggressive surgery often cures the child, but can cause life-long memory, visual, behavioral, and hormonal problems. To lessen long-term side effects, a common treatment option is the removal of part of the tumor followed by radiation therapy. Proton beam radiation is sometimes used to treat these tumors. If the tumor has a large cyst associated with it, treatment may include directly injecting chemotherapy into the cyst to reduce its size.

Surgery is the first treatment for ependymomas. It can be difficult, however, to totally remove an ependymoma in the fourth ventricle because it is so close to the brainstem. Treatment of ependymomas after surgery has historically been controversial. Following surgery, some neuro-oncologists recommend only observation if there is no evidence of residual disease. Other neuro-oncologists recommend local radiation therapy even if there is no evidence of residual disease. If there is residual tumor after surgery, then radiation therapy with or without chemotherapy is given.

These tumors grow in the center of the brain—usually in the suprasellar or pineal regions. Germ cell tumors can spread to other areas of the brain and spinal cord. Treatment varies depending on the cell type and the location of the tumor.

Medulloblastomas account for about 20 percent of all brain and spinal cord tumors in children younger than 15. The majority of diagnoses are in children between ages 5 to 10. The most important factors associated with this type of tumor are location and whether the tumor has spread to other areas of the brain and spinal cord. Medulloblastomas normally grow in the posterior fossa, starting in the cerebellum. As medulloblastomas grow, they sometimes extend into the cerebellar hemispheres, fourth ventricle, or brainstem. Because they can interfere with the normal flow of cerebrospinal fluid, hydrocephalus (excess fluid in the brain) is often present at diagnosis. 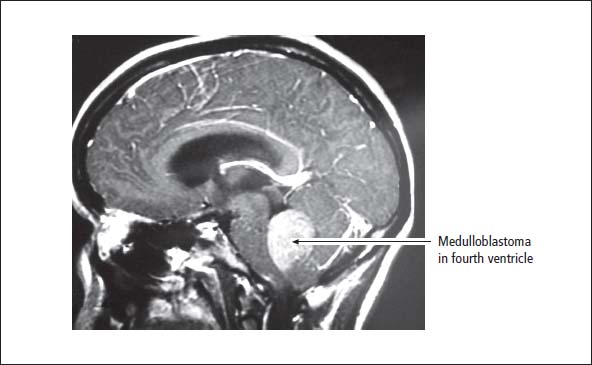 Unlike most other brain and spinal cord tumors, medulloblastoma cells can spread throughout the brain and the spinal cord. For this reason children have an MRI scan of the entire brain and spine at diagnosis to determine if the tumor has spread. The diagnosing physician will also do an analysis of the cerebrospinal fluid by lumbar puncture to check for the presence of tumor cells.

Treatment plans vary depending on the child’s age at diagnosis, the amount of tumor removed, and the extent of tumor spread. Surgery (in one or several operations) is the first treatment for medulloblastoma. Total removal is sometimes difficult if the tumor has spread to the brainstem or the floor of the fourth ventricle. Following surgery, treatment usually begins with radiation, followed by chemotherapy.

Over the past 2 decades, new prognostic categories have been developed by the World Health Organization based on the location of the medulloblastoma tumor and the presence or absence of specific biomarkers that help predict outcome. These categories are classic, desmoplastic, large cell, anaplastic, medullomyoblastoma, and melanocytic medulloblastoma. The ability to subtype medulloblastomas allows the treatment team to tailor the amount of radiation and chemotherapy used to treat the tumor. The subtypes that are associated with a more favorable outcome require less treatment than subtypes that are more aggressive.

Medulloblastoma tumors are grouped into two broad treatment categories: standard-risk and high-risk. Standard risk is defined as medulloblastomas that:

Approximately 5 percent of pediatric brain tumors are gliomas that grow around the optic nerves or hypothalamus. These slow-growing tumors sometimes are diagnosed in children with neurofibromatosis 1 (NF1 or Von Recklinghausen). Optic pathway/ hypothalamic tumors may lie dormant for extended periods of time. Observation with careful clinical examination and serial MRI scans is the treatment of choice.

More aggressive treatment is necessary if an MRI shows tumor growth or if the child develops symptoms (usually visual or hormonal). Surgery, chemotherapy, and radiation are all treatment options for optic pathway/hypothalamic tumors. The precise combination of therapies depends on the age of the child, severity of symptoms, and the location of the tumor.

PNET and medulloblastoma were once considered the same type of tumor that arose in different locations in the brain. Historically, medulloblastoma was the name given to this tumor when it grew in the posterior fossa. PNET was the term used when a tumor grew outside of the posterior fossa in the cerebral hemispheres. Recent research has shown that the two tumors are biologically distinct, but, despite these differences, the treatment for PNET and high-risk medulloblastoma is the same—surgery, craniospinal radiation, and chemotherapy.

The four subtypes of PNET are central nervous system (CNS) neuroblastomas, ganglioneuroblastomas, medulloepitheliomas, and ependymoblastomas. In addition, three biological subtypes have been identified, but enough is not known yet about them to tailor treatment based on any of the subtypes.

Table of types of tumors, usual location, and treatment

Who gets central nervous system tumors?Treatment