Hodgkin lymphoma (which used to be called Hodgkin’s disease) accounts for 6 percent of all cancers in children in the United States. Approximately 800 children and teens are diagnosed in the United States each year. The disease, very rare in children younger than age 5, is most commonly diagnosed in 15 to 19 year olds. It occurs more often in boys than girls in patients younger than age 10, but, in adolescence, the incidence is slightly higher in females than males. Approximately 90 to 95 percent of children and adolescents treated with modern methods survive their disease.

Hodgkin lymphoma, first described by Thomas Hodgkin in 1832, is a cancer of the lymph system. This system is made up of lymph vessels throughout the body that carry a clear liquid called lymph. Throughout this network are groups of small organs called lymph nodes that make and store lymphocytes—cells that fight infection. Lymph tissue is found throughout the body, so Hodgkin lymphoma can be found in almost any organ or tissue, such as the liver, bone marrow, or spleen.

Treatment for Hodgkin lymphoma is risk based, and it usually involves multiagent chemotherapy with or without low-dose radiation. Risk is determined by the stage of the disease, symptoms, and/or the presence of bulky disease (i.e., a large mass).

The goal of treatment for Hodgkin lymphoma is to eliminate the disease with the smallest number of long-term problems. The method of treatment is based on stage of the disease, the age of the child or teen, and possible long-term effects. Historically, children and teens diagnosed with Hodgkin lymphoma were treated with surgery (i.e., removal of the spleen), chemotherapy, and high-dose radiation. Now, radiation often is used in low doses, surgery is almost always omitted, and treatment with chemotherapy alone is done in certain circumstances. Some clinical trials include stem cell transplantation for recurrent disease. The intensity and duration of chemotherapy and the location and amount of radiation used are based on risk factors.

Figure 6-1 shows the areas of the body that may be irradiated in children or teens with Hodgkin lymphoma. Typically, only one field is used for localized disease. However, for patients with stage IIB or IIIB disease, both the mantle and the inverted-Y field are irradiated.

Higher doses of radiation were given to children and teens treated in the 1960s and 1970s. Researchers have worked diligently to fine-tune protocols to give children and teens only the amount of treatment they need for cure and to minimize late effects. Currently, it is much more common to get lower doses of radiation than it was long ago. Thus, survivors treated prior to the 1990s have very different late effects than do those treated more recently. 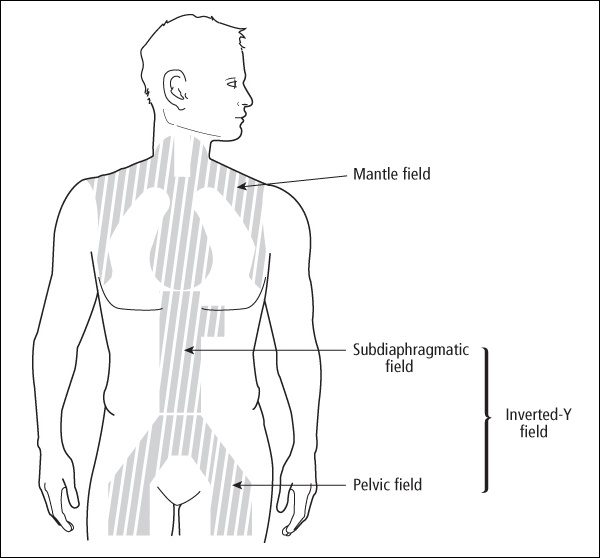 For decades, the traditional chemotherapy for Hodgkin lymphoma was MOPP—mechlorethamine (Mustargen ® ), vincristine (Oncovin ® ), procarbazine (Matulane ® ), and prednisone. This combination of drugs provides excellent disease control, but can cause a variety of late effects. Other chemotherapy regimens used for treating Hodgkin lymphoma are:

Other drugs that are sometimes given, depending on risk, are irinotecan, ifosfamide, and mechlorethamine.

Much is known about possible late effects of treatment for Hodgkin lymphoma because so many children and teens survive the disease. The following information briefly outlines some common and uncommon late effects from treatment. Remember that you may develop none, a few, or several of these problems in the months or years after treatment ends.

Obstructions and infections. Late complications after a splenectomy (surgery to remove the spleen) are adhesions and intestinal obstruction. In addition, bacterial sepsis (massive infection) occurs in some patients who had their spleen removed or irradiated. For more information, see Chapter 16 .

Growth. Radiation can also cause significant late effects in survivors. The growth of prepubertal children who receive more than 3000 cGy of spinal radiation is markedly slowed. Children who are past puberty are usually not as affected as younger children. For more information, see Chapter 17 .

Dry mouth and narrowed esophagus. If the jawbone is in the radiation field, malfunctioning salivary glands can cause dry mouth and tooth decay. Mantle radiation can also result in delayed or arrested tooth development. Another effect that can occur several years after mantle radiation is esophageal strictures (which is narrowing of the tube between the mouth and the stomach). Symptoms are difficulty swallowing or needing to drink liquid to help swallow solid food. For more information, see Chapter 11 .

Osteonecrosis. Some patients who were irradiated and also received chemotherapy that included prednisone develop osteonecrosis (destruction of blood vessels that go to the bones). Osteonecrosis can develop during treatment, but it also can occur years after treatment ends. This condition weakens bones and increases the risk of fractures. Children and teens who receive mantle radiation may also have short collarbones and underdeveloped tissues of the neck and chest. For more information, see Chapter 17 .

Lung damage. Radiation to the chest can damage the lungs, especially in survivors who also received bleomycin. The extent of the injury depends on the total amount of radiation, the amount given each day (fraction size), and the amount of lung tissue in the radiation field. For more information, see Chapter 13 .

Heart problems. Chest radiation (especially in combination with doxorubicin) can affect how well the heart works. Children or teens who received high-dose mantle radiation (more than 3000 cGy) are at risk for cardiac problems ranging from EKG changes (with no symptoms) to life-threatening pericarditis (which is inflammation of the pericardium, the sac surrounding the heart). Other injuries to the heart include underdevelopment of the blood vessels, coronary artery disease, thickening of the pericardium, valve damage, and accelerated atherosclerosis. Treatment with anthracyclines also increases the risk for heart problems. For more information, see Chapter 12 .

Fertility. After pelvic radiation, sterility or changes in fertility can occur in girls. A young ovary can tolerate more radiation than can an older ovary. Prepubescent girls still retain good ovarian function after 600 to 800 cGy, and some still retain function after 1000 cGy. Girls whose ovaries are radiated during puberty or after are more at risk for ovarian problems, including infertility and early menopause.

In males, functioning of the testes may be affected by pelvic radiation. Pelvic radiation can cause temporary oligospermia (a decrease in the number of sperm) or azoospermia (no sperm). If the testes are not in the field of radiation, they are usually unaffected.

Chemotherapy can also affect fertility in males. MOPP therapy (six courses) usually causes males to become permanently sterile, although after three courses up to 50 percent of patients retain fertility. ABVD treatment appears to cause less gonadal damage to males than MOPP. Usually, hormone-producing cells of the testes function well after therapy, so boys continue to grow and have a normal puberty. For more information about fertility, see Chapter 9 , and Chapter 3 .

Reynaud’s syndrome. Reynaud’s syndrome (when fingers and toes become icy, white, and plump when exposed to cold) is a rare late effect of patients treated with vinblastine (Velben ® ) and bleomycin.

Hepatitis C. Infection with the hepatitis C virus can develop in survivors who had blood transfusions prior to July 1992. For more information, see Chapter 15 .

Second cancers. One of the most serious late effects of treatment for Hodgkin lymphoma is second cancers. Some survivors develop either AML (acute myelogenous leukemia) or its precursor—pancytopenic myelodysplastic syndrome. The highest incidence of secondary leukemia is 5 to 10 years after treatment with chemotherapy. After 10 years, it is rarely seen. Solid tumors in the lungs, genitourinary tract, breasts, and thyroid sometimes occur after treatment of these areas with radiation. The risk of developing these cancers increases with time. The risk of developing breast cancer after chest radiation for Hodgkin lymphoma has been estimated to be as high as 35 percent at 40 years of age, depending on radiation dose and age at diagnosis. 3 The greatest risk of breast cancer appears to be in girls treated between the ages of 10 and 16. Thus, all female survivors of Hodgkin lymphoma should have routine mammograms starting 8 years after radiation or at age 25 (whichever occurs last) and have regular breast exams by their healthcare provider. For more information, see Chapter 19 .