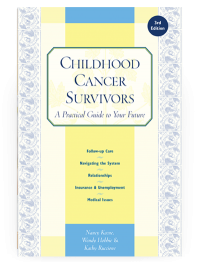 Before describing the effects of treatment on the hypothalamus and the pituitary, it is helpful to understand what substances each organ produces and their function in the body. The following chart outlines this information:

An example of this feedback loop system in the body is when puberty begins. When it’s time for a girl to begin developing, the hypothalamus releases GnRH (gonadotropin-releasing hormone), which stimulates the pituitary to release FSH (follicle-stimulating hormone) and LH (luteinizing hormone). These hormones start the development of the ovaries. When the ovaries begin to mature and release hormones (estrogen and progesterone), the loop is complete and puberty proceeds normally. If, however, the prepubescent girl had high-dose abdominal radiation, the LH and FSH are released, but the damaged ovaries do not respond. The HPA keeps pouring out LH and FSH to start puberty, but the loop is never connected and the system never turns on. In this scenario, the girl would have high FSH and LH, but no estrogen. She would not begin puberty. 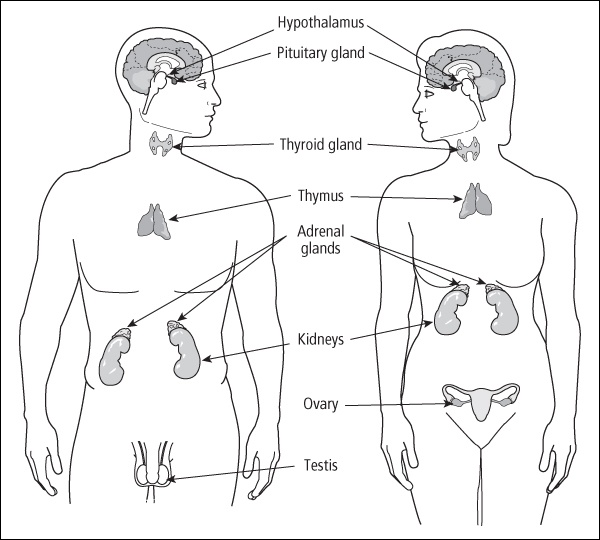 The hypothalamus and the pituitary gland are not normally damaged by chemotherapy; however, abnormalities are commonly seen after radiation to the brain, face, or neck. The pituitary gland can tolerate up to 4000 centigray (cGy) and continue to function well. The hypothalamus is more delicate and can be affected by doses as low as 1800 to 2000 cGy. The amount of damage depends on total dose, method used to deliver radiation, and age of the child when irradiated.

Growth hormone deficiency is the most common problem after radiation to the HPA. It is often not immediately apparent and tends to worsen over time. Younger age at treatment and being female are additional risk factors for short adult height.

Ethan was diagnosed with a brain tumor at age 5 and got radiation and chemotherapy over a 14-month period. Right at the end of treatment, his pediatrician noted that he had not grown nor had he gained any weight over the previous year. Because radiation carried the risk of hormonal damage, she suggested an endocrine work up, which revealed deficiencies of both thyroid and growth hormone. After 6 months of thyroid hormone replacement, the situation was unchanged, and growth hormone (daily shots) was initiated. The results were astounding. After the first month of growth hormone, Ethan had his pre-cancer energy back. He was impish in a way he hadn’t been in 2 years. His appetite ramped up and he grew. The one problem we had was that he later had signs of premature puberty. He needed to have additional shots of Lupron ® (once a month, but intramuscular) to halt that process. Growth hormone was a big success for Ethan. At 17, he is a bit shorter than his siblings, but not by much, and most importantly, he doesn’t feel short. He recently went to adult maintenance doses of growth hormone (still once a day, but a smaller amount) and he does it all himself.

The survivors most affected by damage to the HPA are those who were treated for brain tumors. Almost all children treated with more than 3000 cGy to the brain experience growth disruptions. In contrast, children with leukemia who received 1800 to 2400 cGy of cranial radiation have less frequent, milder problems with growth.

My treatment for leukemia (diagnosed at age 11) and three relapses lasted almost 14 years. I was on four different protocols and had a bone marrow transplant. I had 2400 cGy of radiation plus whole body radiation prior to my transplant. I’ve had no problems with growth—I’m 6’1”. I have no endocrine problems. Cognitively I’m fine. I have all my hair. I’ve had such a great outcome.

My daughter had 2400 rads of cranial radiation and also spinal radiation to treat her relapsed acute lymphoblastic leukemia. Until then, she was at the high end of the growth scale, but she stopped growing. When we started growth hormone, she grew an inch in the first 2 months. She’s now 10 years old and is 4’4”.

Survivors whose growth is most likely to be affected are:

Our son Chris was a big boy until his treatment for medulloblastoma. His height froze for a year while he was being treated. He had surgery to remove the tumor and both cranial and spinal radiation. He’s now on the shorter end of average for kids in his grade.

My son had high-risk leukemia, relapsed twice in the CNS (central nervous system), and had a bone marrow transplant (BMT). He had 2400 cGy of radiation to his brain and spinal cord, then total body radiation and Cytoxan ® prior to transplant. He has not grown much since the BMT. He is entering seventh grade, and is 4’10”. His friends have all continued to grow, so this is starting to bother him. He has not really started puberty yet, either. He still has the little boy voice. He has been followed by an endocrinologist, who said he will decide what to do this January if puberty hasn’t started yet. He was always at the 95th percentile of height before cancer, but he definitely is not anymore.

An early growth spurt coupled with early sexual maturation can also result in short stature. This happens because the bones stop growing when sexual maturity is reached. When this happens at a young age, the child loses 2 or 3 years of additional growth.

Children or teens who received high-dose radiation (more than 3500 cGy) to the area of the hypothalamus and pituitary often develop a variety of hormonal abnormalities. They are at risk for growth hormone deficiencies; early sexual development; deficiencies in production of LH, FSH, adrenocorticotrophic hormone (ACTH), and thyroid-stimulating hormone (TSH); and may produce too much prolactin. These problems may develop years after treatment, so these survivors need long-term endocrine follow-up. Although this chapter describes each of these problems separately, survivors often have combinations of endocrine problems.

My daughter has hormone deficiencies due to radiation to the pituitary. She had rhabdomyosarcoma in the nasopharynx and was treated with 5400 rads of radiation. The pituitary had to be included in the radiation fields because the tumor was right next to it. She is growth hormone, thyroid, and estrogen deficient. The estrogen and thyroid are replaced by daily medication. We opted not to use growth hormone since she was about 5’3” when she became deficient. Her cortisol is fine.

There are numerous other problems from damage to the HPA that do not directly involve growth. These rare problems are listed here:

Signs and symptoms of damage to the HPA can take many forms. Common late effects are decreased growth, early or late puberty, and low levels of LH and FSH hormones.

Decreased growth. Decreased growth is a common problem for all children and teens on therapy for cancer. Many children experience catch-up growth after treatment ends. A few survivors continue to have slowed growth long after therapy ends. Signs and symptoms of impaired growth are:

Although parents are often relieved to see growth during puberty, their child may end up very short if puberty does not start at a normal time and last the usual number of years.

Late puberty. Puberty can also be delayed by treatment for childhood cancer. Normally, puberty begins by age 13 in girls and 14 in boys. However, if hormones produced by the pituitary (LH and FSH) are disrupted or decreased by treatment, girls and boys may not start puberty at the normal time. Signs and symptoms of delayed puberty are:

Abnormal LH or FSH hormone levels in females. Signs and symptoms of low LH or FSH in females during or after puberty are:

Abnormal LH or FSH hormone levels in males. Signs and symptoms of low LH or FSH in males during or after puberty are:

Any child or teen who had radiation to the brain should be carefully screened for growth failure. A healthcare provider should measure standing height and plot it on a growth chart (i.e., graph that shows if the child is growing normally for his age) every 6 months. Sitting heights should also be obtained for any survivor who had radiation to the spine (i.e., total body radiation, mantle, spinal). The heights should be analyzed in light of the child’s pre-cancer growth, current bone age (determined from a hand x-ray), stage of puberty, and height of parents.

I had a bone marrow transplant when I was 7 and because of the side effects of some treatment, I ended up having a very early period. I was so happy at the time, and we assumed it was a good sign that things were going well. However, as it turns out, starting my menstrual period at such a young age caused me to be much shorter than I would have been. I was one of the tallest kids in my class until grade eight. Then they all kept growing and I stayed the same height.

Any child who, after treatment, is growing slowly (i.e., less than 2 inches a year) or is in the fifth percentile or below for height should have the following tests:

All children with growth concerns should be referred to a pediatric endocrinologist.

I had an ependymoma when I was 8 years old. I’m now the second to shortest kid in my class. When I was 12, my endocrinologist put me on Lupron ® to prevent an early puberty and to get as much growth as I can. It’s a shot every 28 days. It doesn’t bother me because it is for a good cause. I go to my regular pediatrician to get it and he’s a good shot giver. Now we are discussing whether to go on growth hormone.

My son was treated with radiation for astrocytoma. We just found out that his GH (growth hormone) is really low. The highest number he had was 4.9 out of all four blood draws. We also got the “wonderful” news his testosterone level was 463, which is equivalent to an adult male! And he’s only 9 years old. So now we go back to the children’s hospital to get growth hormone and Lupron ® to stop the poor child’s puberty. We haven’t explained to Justin yet that this means one shot a day for the GH and one shot every 28 days for the Lupron ® .

Some teens do not begin puberty at the normal age. This can be caused by organ failure (see sections about ovaries and testes) or lowered LH and FSH production due to HPA damage from radiation. These adolescents should have a comprehensive evaluation by a pediatric endocrinologist that includes bone age, LH and FSH levels, testosterone or estradiol (estrogen) levels, and thyroid function tests for those who had high levels of radiation (more than 3000 cGy) to the HPA. For survivors who had more than 5000 cGy to the HPA, tests of cortisol and prolactin levels also are recommended.

Healthcare providers of survivors at risk for problems stemming from HPA damage should discuss the signs and symptoms with parents (or older survivors) and give a thorough yearly evaluation. The following are the current methods used by most follow-up clinics to treat HPA problems: