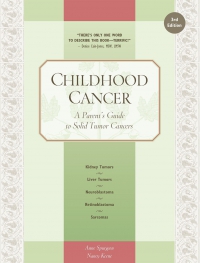 If your child receives the standard treatment, you will be given a written copy of the treatment plan, called a protocol. Just like a recipe for baking a cake, a protocol has a list of ingredients, the amounts to use, and the order to use them for the best chance for success. The protocol lists the treatments, drugs, dosages, and tests for each segment of treatment and for follow-up care.

The portion of the protocol devoted to the schedule for treatments and tests may be quite long. The family may also be given an abbreviated version (one to two pages) for quick reference on a daily basis. This abbreviated part of the protocol is frequently called the “roadmap.” Parents and teenage patients should review these documents carefully with the treatment team to be certain they understand them.

It took me a long time to get over my hang-up that things needed to go exactly as per protocol. Any deviations on dose or days were a major stress for me. It took talking to many parents, as well as doctors and nurses, to realize and feel comfortable with the fact that no one ever goes along perfectly and that the protocol is meant as the broad guideline. There will always be times when your child will be off drugs or on half dose because of illness or low counts or whatever. It took a long time to realize that this is not going to ruin the effectiveness, that the child gets what she can handle without causing undue harm.