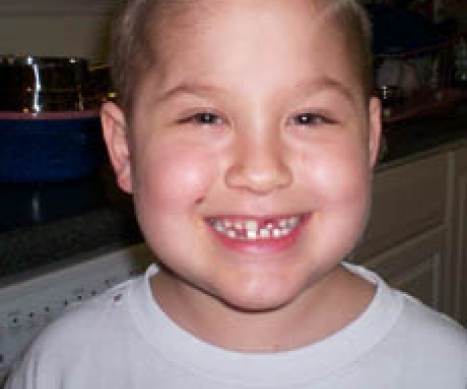 Eli had reoccurring fevers which began in September of 2007 and throughout October. Ruth, Eli’s mother, took Eli to the doctors, and they prescribed Amoxicillin for a sinus infection, ordered a blood test to find Eli had a low white blood cell count as well as low platelets. That test was done on November 8th. Ruth was to take Eli back on the 15th for yet another blood test. Ruth called, and got the test moved up to the 13th because we noticed Eli was getting very pale in color.

The results to this test were Eli's white blood cells and platelets to be even lower. Ruth called me to give me the news, so I decided to go to the doctor’s office to pick up the data from these tests. The nurse took me to a room to discuss the results. We were very worried as his counts had dropped so much. Eli's white cells were 1.6 and they should be 5.1 to 14.5. Also his platelets were 192 and they should be 150 to 400. I called Ruth to let her know I was on my way and we were going to (CHOP) Children’s Hospital of Philadelphia. We arrived in the Emergency room around 8PM and many tests were performed. The blood test showed Eli's blood counts to be dropping more. The doctors could not identify the cause of the low counts so they had to do a bone marrow test. On November 15th around 1AM the doctors entered the ER room to give Ruth and I the worst news of our life. Eli was diagnosed with (ALL) Acute Lymphoblastic Leukemia, a form of CANCER.

I'll tell you, our world stopped turning on that day. Eli was admitted to the hospital immediately, put on IV fluids, and the procedures started, including chemotherapy right away. They jumped right on it to save our son. He is currently going through what is called "Delayed Intensification". There is a "roadmap" they follow of procedures that has proven to be most effective. We are given a copy of the roadmap, so we are aware of what is to come up next. He is being a very brave boy and tries not to cry, but it is really hard. He takes his beloved "puppy" to all the procedures, and it consoles him when nobody else can. He sits with him when he takes his yucky tasting medicine and tries not to throw up. This is the beginning of a very long rough recovery therapy. We ask that you keep Eli in your prayers daily and we know that God will heal this wonderful angel boy that we are blessed to have in our lives.

Update: Sadly, Eli passed away in January of 2011.

Donate in Honor of Eli Today!