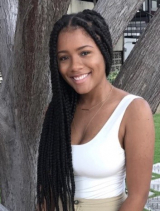 Leukemia is the most common type of childhood cancer, and of the number of children who have leukemia, 25% have acute myeloid leukemia (AML). The United States has a 5-year survival rate of approximately 60% for children. However, 50% of U.S. patients who achieve complete remission will still have a relapse, which is significantly higher than relapse rates in Europe and Japan, at 24% and 30%, respectively. The clear difference in rates make investigating post-relapse therapy in the U.S. increasingly important. Many international groups use chemotherapy and hematopoietic stem cell transplantation (HSCT) for high-risk children, but there is limited information in the U.S. about relapsed AML therapy. With the data the pediatric oncology department at the Children’s Hospital of Philadelphia has about treatments used in the U.S., the project will focus on disparities in therapy for children with relapsed AML and how it differs by race, ethnicity, and socioeconomic status. My responsibility will be to update the literature review about relapsed AML therapy and about factors that are barriers to optimal cancer care for children in the U.S., such as race and socioeconomic status, using a cohort of patients from 14 institutions participating in Dr. Aplenc’s Patient Centered Outcomes Research (PCORI) project. I will work with the team to geocode patients (place them in specific neighborhood contexts) so that outcomes can be recorded by region. I will also be responsible for adding and updating patient outcome data and relapse treatment data for patients in the PCORI population. In addition, I may work with the Leukemia Electronic Abstraction of Records Network (LEARN) cohort to perform chart abstractions if needed and if travel is not possible to PCORI sites.