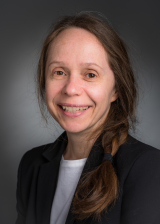 Our laboratories completed a genetic study of pediatric LGGs. We identified a chromosome abnormality as the cause of angiocentric glioma (AG), a subtype of pediatric LGG: two genes, MYB and QKI, are truncated and fused to each other. MYB normally promotes cellular growth and QKI suppresses it. MYB-QKI causes tumors for unknown reasons. Understanding how a disease-causing gene functions is critical to designing therapies that block it.

We will study how MYB-QKI functions to design new therapies. This proposal emphasizes QKI because it is poorly characterized. QKI genetic alterations are frequent in cancer. Since normal QKI binds to RNA molecules, we will identify the RNAs that bind to MYB-QKI and their roles in AG. Since QKI is controlled by other proteins, we will identify those that control MYB-QKI. Finally, we will search genome-wide for genes that cooperate with MYB-QKI. All findings represent potential therapeutic targets. We previously observed that MYB-QKI activates other genes, including CDK6 and KIT. CDK6 and KIT inhibitors will be tested against MYB-QKI.