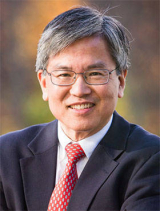 Germ cell tumors (GCTs) are rare tumors that occur in various locations including the brain. Intracranial GCTs (IGCTs) can be divided into germinomas and nongerminomatous germ cell tumors (NGGCTs) with NGGCTs further divided into five subtypes. IGCTs can be treated with various combinations of chemotherapy and radiotherapy with the germinomas having better response than NGGCTs. Because these tumors are found deep in the brain, obtaining a biopsy for diagnosis is very challenging and risky. So we rely on measuring the levels of two proteins, AFP and β-HCG, in the blood or the cerebrospinal fluid (CSF) to help distinguish germinomas and NGGCTs. Unfortunately, these two proteins can only help diagnose some of the subtypes of NGGCTs but not germinomas and other subtypes of NGGCTs. Therefore, there is an urgent need to identify other diagnostic markers to improve the correct diagnosis of IGCTs. We have found that microRNAs and DNA methylation profiling in CSF could significantly improve our diagnostic capabilities of IGCTs. Because these are very rare tumors, we formed a consortium of 19 children’s hospitals to combine our cases together to carry out a definitive study that will test the effectiveness of these two new tests in the clinical setting. Once they are established, these two tests would become part of the new standards in diagnosing these tumors and move the upcoming clinical trials of the Children’s Oncology Group (COG) forward with confidence.

Our overall goal is to improve the diagnosis of IGCTs and IGCT subtypes so that patients can be treated more effectively. We will assemble 100 cases of IGCT from 19 children's hospitals, most of which belong to the Pacific Pediatric Neuro-Oncology Consortium (PNOC), the largest clinical consortium studying childhood brain tumors. This will be accomplished in collaboration with the Children’s Brain Tumor Network (CBTN). Since 2004, this national coordinating center has collected samples of pediatric brain tumors and cerebrospinal fluid (CSF), as well as clinical data, to facilitate research that will ultimately improve the treatment outcomes of children with brain tumors. Collection of CSF samples from IGCT patients by spinal tap is a routine procedure to diagnose IGCT and is much less invasive and safer than a surgical biopsy. Using the CSF samples, we will conduct genomic profiling of microRNA and DNA methylation, both of which have been demonstrated to be useful in distinguishing germinomas and NGGCTs in tumor biopsies but have never been conducted in CSF. Once these tests of CSF are shown to be effective in differentiating between germinomas and NGGCTs, we plan to further evaluate their usefulness in monitoring the response of the tumors to treatment or relapse following treatment. If we have enough samples from NGGCTs, we will also evaluate if these two tests can identify the various subtypes of NGGCTs. We expect to complete this study in two years and do the final testing in two upcoming Children’s Oncology Group (COG) clinical trials in IGCT.