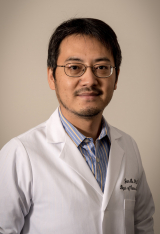 Pediatric brain tumors are the most common solid tumors in children, with approximately 5,000 new cases diagnosed per year in the United States. Around 17% of brain tumors in children age 0–14 years are pediatric high-grade gliomas (pHGGs). pHGG is the most lethal cancer in children; the median survival duration of children with HGG is only 12–15 months despite aggressive therapy. pHGGs show distinct features from their adult counterpart (adult glioblastoma), and no advanced therapy for the disease has been developed during the last 3 decades. Most recently, mutations of a new driver gene in pediatric HGGs has been identified, which occur in about 50% of pHGGs. However, the underlying mechanism of these mutations and their therapeutic potential are still waiting to be explored.

Neural stem cells (NSCs) are a group of cells that maintain the ability to generate all kinds of neural cells in developing brain, and have been considered as the origin of pHGG. We engineered a novel mouse model to mimic the process of pHGG development by manipulating NSCs in mouse brain. And we have successfully established de novo mouse pHGG, which faithfully recapitulate the features of the human disease. With multifaceted approaches, we identified key mediators of pediatric gliomagenesis, which are highly expressed in human pHGGs and are closely related to poor patient survival. This study will help us better understand how pHGGs initiate and progress and will ultimately expedite the development of new therapies against pHGGs.

By taking advantage of our faithful mouse model and clinical data, we have found that two key genes that play major roles in promoting pediatric gliomagenesis. In this proposal, we plan to illustrate the mechanism by which these newly defined key players promote pediatric gliomagenesis and try to design new therapeutic approaches by targeting these components to cure pediatric high-grade gliomas (pHGGs).

Our overall hypothesis is that the mutations on the driver gene can induce global chromosome modification changes, which therefore provoke major oncogenes’ expression and accumulate neural stem/progenitor cells with impaired differentiation ability. To test our hypothesis, we will pursue the following 2 goals:

1) Determine the function and therapeutic values of these newly defined key players in pediatric gliomagenesis.

The completion of the proposed studies will not only help clarify how driver gene mutations contribute to gliomagenesis but also—and more importantly—provide insights into developing novel therapeutic strategies for pHGGs and other cancers that frequently harbor the same driver gene mutations.