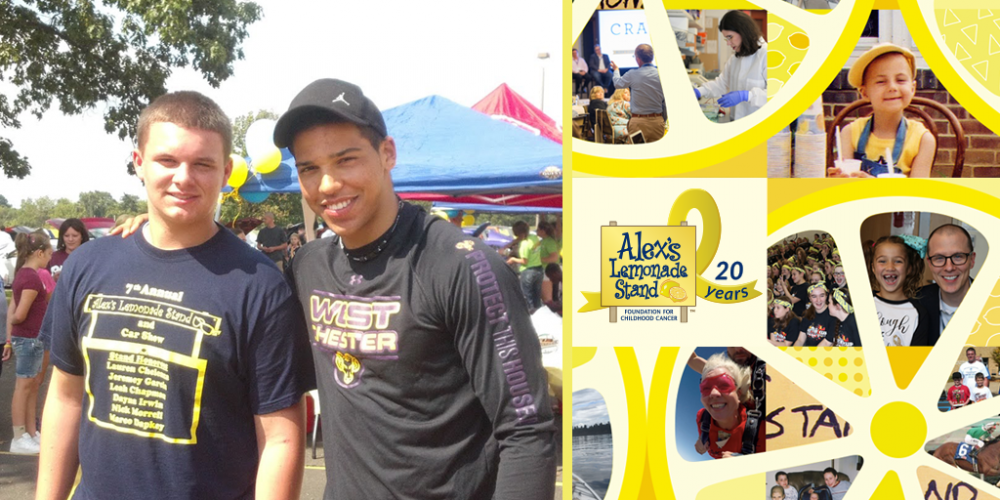 It was only supposed to be a one-time thing.

The unassuming lemonade stand that stood in 2006’s September summer heat had been set up in celebration. Riley Gillespie’s best friend, Jeremey, had finished his last chemotherapy treatment for acute lymphoblastic leukemia. Riley hoped to honor Jeremey’s fight by raising some money for a few hours for Alex’s Lemonade Stand Foundation (ALSF). At 9 years old, the boys didn’t worry if they didn’t make much. It was just a lemonade stand.

But the cups kept flying until they were left with $3,200 in just five hours’ time.

Neither of them had ever seen so much money in their lives.

“We realized there was a lot more that we could do to raise money for pediatric cancer research,” said Riley.

A few years later, their stand had outgrown their neighborhood and found a new home at Neshaminy School District’s Maple Point Middle School, upgrading to a full community event with carnival-style games, raffle baskets, a bake sale and a professionally judged car show that hosts over 150 show cars. Today, the event has raked in more than $100,000 for pediatric cancer research.

Now a new college graduate from the University of Pittsburgh, Riley has stayed true to his past experiences. “While recently my time has been devoted to my education, my passion for the Alex’s Lemonade Stand Foundation – to help find a cure for childhood cancer – has remained on my mind,” said Riley. “The people I have met and the friends I have made through ALSF have played a large part in making me the man I am today – I would not trade them for the world.”

While at Pitt, he continued to trumpet the importance of the Foundation’s mission, deflecting any credit directed his way.

“To be honest, I am not the one making a difference,” he humbly admitted. “The ones who come out and show their support for ALSF – each and every person who donates, no matter what they contribute, are the ones making a difference.”

We’re sure Alex wouldn’t agree more. In fact, her parents, Liz and Jay Scott, co-directors of ALSF, recognized Riley at the 2015 Lemon Ball by naming him Stand Host of the Year. It’s one of Riley favorite memories, alongside that morning he first made signs with Jeremey for their front yard lemonade stand, just like Alex had for her front yard stands.

Although Riley has been away at school his family has still made contributions to ALSF annually and encouraged others to get involved as well. “I wholeheartedly believe that finding a cure for childhood cancer is within our reach,” Riley said, knowing he and Jeremey have helped ALSF accelerate the world of pediatric cancer research.

Once he has his degrees in hand, Riley plans to bring his event back to life. For now, he wants others to take a page out of his book and remind everyone that aiding the fight against childhood cancer is as simple as selling lemonade, one cup at a time.