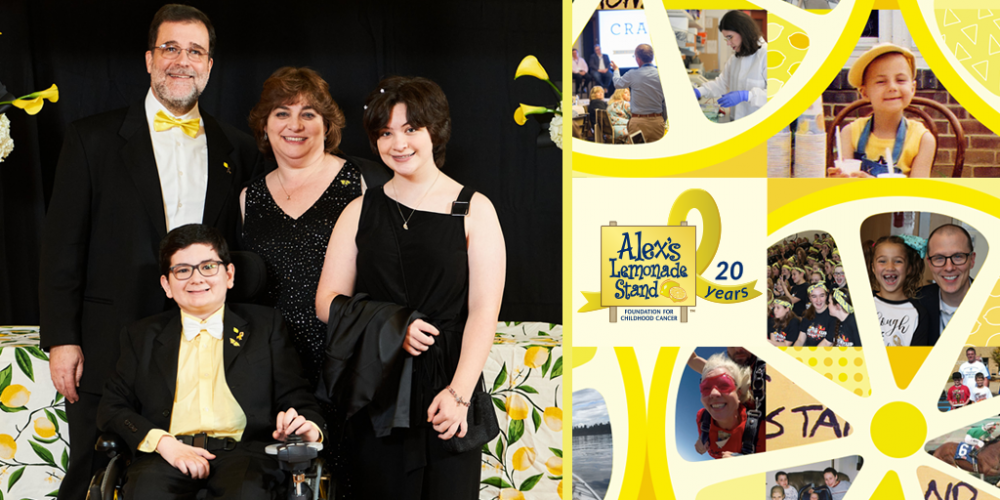 The first time, Tony was just 2 years old and was diagnosed with stage IV high risk neuroblastoma. His treatment was intense: biopsies, stem cell extraction, six rounds of inpatient chemotherapy, radiation, and two stem cell transplants. Tony finished treatment and moved onto regular scans, blood work, EEG’s and EKG’s to monitor his heart function, endocrinology to watch his growth, nephrology to watch his kidneys and neuropsychology testing to follow up on his brain and cognitive function.

Tony’s doctors have a joke — in a not so funny way — that if there is a treatment side effect to be had, Tony got it. He developed cataracts in both eyes, high frequency hearing loss, growth hormone deficiency, orthopedic issues, thyroid dysfunction, immune dysfunction and chronic high blood pressure.

As if those issues were not enough, then Tony went into kidney failure at just 13 years old. His father, “Big Tony,” became his kidney donor. Tony vividly remembers the transplant and brief sense of relief in the aftermath.

“I came home and thought I could put things behind me, boy was I wrong,” said Tony.

The second time Tony battled cancer, he developed a rare transplant side effect called post transplant lymphoproliferative disorder, a type of lymphoma. He had to endure six more rounds of chemotherapy. During this second cancer treatment, Tony’s bowel perforated — a medical emergency that landed him on a helicopter to Children’s Hospital of Philadelphia. Tony had sepsis – a life-threatening complication from infection – multi-organ failure and was placed on a ventilator in a medically induced coma.

Eight months later, Tony was discharged from the hospital. His time in a coma left him with critical illness myopathy, where the connections between the brain and muscles disappeared. When Tony woke from his coma, he was unable to move his body, beyond just blinking his eyes. In time, Tony has been able to regain movement in his body, although his muscles remain weak.

His third cancer diagnosis — skin cancer on his back — happened late last year, most likely a side effect of radiation.

Now Tony is home, but he cannot walk or fully move his hands.

But what he can do, he does and does well. Tony earned the rank of Eagle Scout in October 2019. He also works every day in therapy to regain his strength and walk again. And, together with his family, Tony tirelessly advocates for childhood cancer research as an Alex’s Lemonade Stand Foundation (ALSF) Ambassador.

“I don’t actually remember a time when ALSF wasn’t part of my life.  My mom tells me that we first got involved during my initial treatment. We met Jay and Liz when I was only 3 years old. Since then, we have become a treasured member of Alex’s family.  We go to as many events as we can. I have made many friends along the way, some of which we have sadly lost, and others who are still with us that are fighting and some who are just, like me, dealing with side effects,” said Tony, who together with his family were honored as Volunteers of the Year at the 2018 Lemon Ball.

Tony’s focus now, in addition to his volunteer work for ALSF, is on graduating high school.

“At this point, we don’t know exactly where his recovery will get but we know for sure, his medical side effect journey is not going to end,” said his mom Karen.