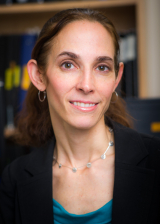 There is an urgent unmet need for more efficacious therapies for childhood cancers. Due to market considerations, however, there is little incentive for commercial entities to develop drugs for pediatric malignancies. Moreover, many of the cancer-promoting, tumor-specific proteins in these pediatric cancers have been considered difficult to target ("undruggable") by traditional drug discovery approaches. In this proposal, we will use a pipeline of innovative assays to identify compounds that inhibit one such difficult to target protein, the EWS/FLI protein, which is responsible for the development of the pediatric solid tumor Ewing sarcoma. Specifically, these efforts seek to provide academic leadership in the search for new therapies for patients with Ewing sarcoma. More broadly, they will develop a generic strategy for identifying chemical modulators of the myriad of other "undruggable" cancer-promoting proteins in pediatric malignancies. Bridge funding is sought to enable initiating these discovery efforts, which in turn will provide a strong basis for seeking more extensive NIH grant support within 12 months.

What were you initially studying with your grant funded by ALSF?
Our ALSF grant was focused on the pediatric solid tumor Ewing sarcoma, the second most common tumor involving bone in children. While cure rates for children with localized disease have improved with combinations of traditional chemotherapeutics delivered in a time-intensive approach, cure rates for children with metastatic or relapsed Ewing sarcoma have lagged behind. New, and ideally more tumor selective, approaches to treating this disease are needed. We sought to target EWS/FLI, a tumor-promoting, cancer cell specific protein important in the development of the majority of Ewing sarcoma cases. This protein, and others in the same class of proteins that bind to DNA, have been difficult to target with standard approaches to drug discovery. In this proposal, we aimed to use a pipeline of innovative assays to identify compounds that inhibit the EWS/FLI protein.

What have you found?
We have developed multiple new methods to measure the modulation of EWS/FLI. These methods were used to conduct a pilot drug screen and to validate candidate drugs emerging from the screen. With critical support from ALSF Bridge funding, we focused our efforts on a new compound class scoring in the pilot EWS/FLI modulation screen. These compounds inhibit a gene expression fingerprint of the active EWS/FLI protein and alter protein levels of well reported EWS/FLI targets. They also impair the growth of Ewing sarcoma cells in the laboratory. We are using these drugs, and other newer drugs in the same class, as probes to better understand the development of Ewing sarcoma tumors, and we are conducting the preclinical validation studies of these drugs in Ewing sarcoma models. Additionally, we have extended our EWS/FLI screening efforts to a larger collection of over 350,000 chemicals and are actively studying promising hits that emerged from this screen.

What does this mean for children with cancer and their families?
Orphan diseases, such as childhood cancers, receive less attention from a drug development perspective than other more common adult malignancies. Moreover, targets such as EWS/FLI and other cancer-promoting proteins that bind to DNA, the so-called “transcription factors,” have generally been avoided as the starting points for targeted therapy as they pose a drug discovery challenge. Thus, it is essential for academic research programs to advocate for these diseases and to innovate around the targeting of these proteins that are commonly aberrant in childhood cancers. Over the last 10 years, there has been increased activity in the academic pediatric oncology research community to directly engage in drug screening efforts. It is my hope that these efforts will prove fruitful in the development of therapeutic approaches for treating children with cancer.

Has this research been published?
Not yet but we have presented the data at the following meetings:

What has this grant from ALSF allowed you to do that you wouldn’t have been able to do otherwise?
ALSF funding enabled us to generate preliminary data that fueled the development and completion of a much larger drug discovery effort in Ewing sarcoma. We succeeded in obtaining NIH funding to complete a chemical screen of over 350,000 compounds.

Why did you choose to work in this field/on this topic?
I am inspired each day by the children whom I care for that have been diagnosed with these diseases. The treatment of patients with metastatic and relapsed Ewing sarcoma represents an unmet medical need. In light of the stagnation in long-term survival rates for patients with high-stage disease, and the market disincentive for commercial entities to engage in drug discovery efforts, given the limited size of this pediatric patient population, academic leadership in these endeavors is imperative.