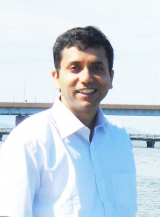 Medulloblastoma is the most common malignant brain tumor affecting children and comprises ~33% of pediatric brain cancers. Medulloblastoma is a tumor originating in the cerebellum and most of these tumors arise from unregulated proliferation of cerebellar granule cells. Current treatment strategies have not changed much over the years and are associated with high morbidity and mortality associated with recurrence. Thus, there is an urgent need for more effective and targeted therapies that reduce toxicity and prevent recurrence. Cerebellar granule cells proliferate after birth in a developmentally regulated process that depends on the signaling molecule sonic hedgehog and the primary cilium, a hair-like dynamic signaling antenna for cells, before migrating and maturing as neurons. However, the role of ciliary signaling in granule cell proliferation and ciliary dynamics during migration/maturation in causing medulloblastoma is not known.

Here, using newly developed mice models and studying patient tumor samples, we propose modeling medulloblastomas, particularly sonic hedgehog subtype, as a disease of aberrant cerebellar granule cell development. We determine mechanisms underlying the balance between cilia-regulated proliferative and maturation signals and study these developmental aspects in the context of tumor initiation and progression. Our fundamental discoveries of key factors in the poorly understood negative regulation of the sonic hedgehog pathway and approaches to study primary cilia dynamics in the context of granule cell cycling and maturation will not only provide much needed unique insights into medulloblastoma initiation and progression, but will also identify key therapeutic targets to treat this devastating pediatric cancer and in preventing recurrence.