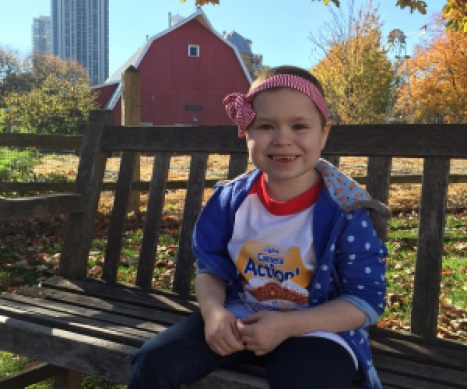 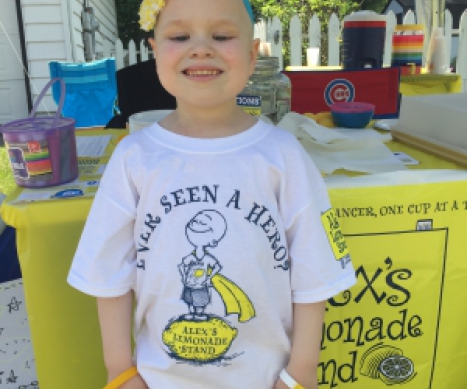 Anna is a kind, spirited, funny and affectionate firecracker of a kid. She loves pandas, all things purple and her family. Anna knows no strangers...everyone is her friend. She faces treatment and adversity with curiosity, bravery and independence. It is hard to believe that so much personality fits into a 6-year-old body! Every day is a new opportunity to dance, do gymnastics, create art, help others and make herself and everyone around her laugh. But her favorite activity is baking, and if you don't invite her to help in the kitchen, she will drag her little chair right up to the counter, step up and demand that she help. Watch out cancer...Anna is in charge!

In spite of Anna's typical boundless energy, she had recurring fevers that would come and go daily. Her energy began to fade, which was highly unusual for this hyperactive child. She had just started kindergarten. When the nurse sent her home with a fever, she was taken to the pediatrician to try to determine what was wrong. Initially they were told that her swollen spleen was due to mono, but that didn't sit right with Anna’s parents. Could a five-year-old really get mono? Supposing it was possible, but wanting to be completely certain, she was taken to the nearest children's hospital ER. After many hours of blood draws, tests and waiting, her parents were told the earth-shattering news that she had leukemia. Anna’s mother Ruth remembers nodding along as the doctor continued to speak, but hearing less of what he was saying. Shortly thereafter Ruth began to pass out and the staff ran in with a second gurney to put her on and lay next to Anna. After regaining her composure, the team took them upstairs to the PICU where Anna would stay for the next 10 days or so, followed by several days in the pediatric ward to start her treatment. They soon learned that her liver was also enlarged and that she had kidney stones from her extremely high white blood-cell counts, which complicated her early treatment.

Anna was part of a study for high risk T cell ALL. She began with inpatient treatment in the hospital and then transitioned to a mix of outpatient and inpatient treatments, as well as home-based treatments, depending on the phase of the protocol. She received a variety of tests including echo-cardiograms, CAT scans, ultrasounds, as well as many blood product transfusions. She has had restrictive diets for her kidney stones and when she would become neutropenic during treatment. She has been accessed hundreds of times and she continues to face that with grace and strength. In February 2018, Anna finally had her last day of chemotherapy. Her family was thrilled and threw a party in her honor with shirts that said, “No More Chemo for Anna.” Even after Anna found out she would be done with treatment she still hoped she could visit her friends though, the doctors and nurses who supported her throughout her fight.

Even though she is a child, Anna has wisdom and serenity beyond her years. Ruth says Anna is her hero because, “I have known adults who have struggled with less than what she has to overcome. She handles every needle access, lumbar puncture, scan, transfusion, new medicine and appointment with a positive attitude and joy. She truly looks forward to her clinic visits because in her mind she sees the big picture, that we are keeping the leukemia away and that she can see all her doctor and nurse friends. She sees the world in such a positive and happy light, that you cannot spend time with her and wallow in anything you have to overcome. She is generous in every blessing she receives and always asks if her sister can also have a gift, if she can share the treat meant for just her and if we can give our extra money to people she sees asking for it. She takes charge of her treatment because she is endlessly curious about what is happening to her, but she consistently thinks of how her actions impact others. If she were anyone else, I would want to be her friend or student. So I consider myself ever so lucky to be her mom and I try to keep her spirit in mind when I am confronted with challenges. She really is my hero.”

Ruth’s hopes and dreams have layers. She says, “In the short term, I am so grateful for how far we've come in the year since her diagnosis. I obviously hope that we keep leukemia at bay for the rest of her protocol and that she not suffer until we get to that milestone. Once we are there, I would hope that her treatment has not impacted her so greatly that she can fulfill whatever dreams she has for the future with minimal impact to her physically from the harsh medicines and procedures that were necessary to save her life. Until we get there, I dream of our family helping to bolster others new to this journey and those yet to come...helping to champion the importance of improved treatments and cures with our community and those who influence decisions to make that happen...and helping ALSF in any way we can. I wish that every day we keep the big picture in mind and appreciate the small and tender moments along the way. Living with that simple mantra will hopefully give us piece and strength as we all face the unknown future.”

Ruth wants others who may have recently received a cancer diagnosis to know there is no sugar-coating what lies ahead...you will face vocabulary, people, obstacles and options that you may never have known existed. The day before the diagnosis, you did not know what the next day and all of your next days would bring. This may be the hardest road you've ever had to walk, but you are not alone. There are many wanderers with you. We have been where you are and we understand the fear of the early days, when you are accepting this new life. Your fear for your child will ebb and flow...it won't happen all the time, but it will be there. You will learn how to live and accept this, but it won't be easy. You may not feel like you can reach out now or yet to lean on anyone beyond family and friends in this aftermath, but we are here to help and support you when you are ready. We can answer your questions or simply be an ear to vent. You might not see it now, but you will find a way to make it down the road, likely a different path that you had in mind for your child or your family. It will shape you in ways you will not believe or understand now, and you will be permanently changed. Your relationships to others will change. Your priorities will change. The future will remain unknown, but there is a community that is ready to help you down the road. It is the best thing that has happened out of the hand we were dealt, and I would highly recommend that you seek those resources, especially other parents and families, to help soften this terrible blow. You will get through this...differently than you thought...but you will.

Alex’s Lemonade Stand Foundation is meaningful to the Ciamarra family. It is a positive force in creating a new ending for the stories of all the children and families impacted by cancer. Cures and better treatments are needed...now! ALSF is a vehicle for taking hope into capital letters and letting the world know that it is possible to change the future, one cup at a time. It means that a grassroots movement can mean new futures for our children and generations to come. Ruth says, “It means that my child is empowered herself to participate in changing her own future and for kids just like her.” The Ciamarra family has hosted a lemonade stand during National Lemonade Days. Ruth and Anna also attend the ALSF Young Investigator Summit as Childhood Cancer Ambassadors.

Anna asks all the time: "When will I be done with cancer?"

Donate in Honor of Anna Today!