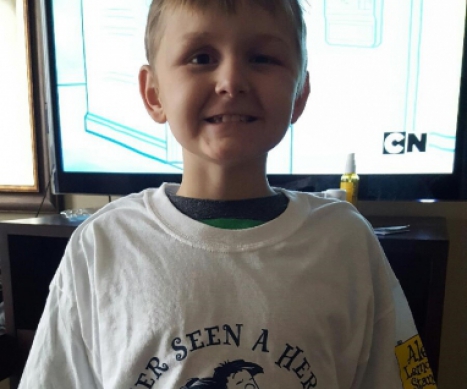 Blaze is an old soul. He has been through so much in his life. His childhood was short because he was diagnosed with cancer at 3-years-old. He is now 9, so for many years he couldn’t be a normal child. He is sensitive, loud and sometimes depressed.

Blaze’s mother was checking her four children for lice, after receiving a letter from their school. While checking Blaze, she noticed lumps under his ears and on his neck. She then checked his lymph nodes, which were swollen. He also had patchy, tiny purple marks all over his stomach. Blaze’s mom, Lisa, who works in the medical field knew these signs were not good, so she took him to the hospital.  The doctor did blood work and found that Blaze had one of the highest counts he had ever seen. Blaze was diagnosed with pre B acute lymphoblastic leukemia (Pre B ALL). The doctor was amazed that Blaze was still so energetic, despite his diagnosis. Blaze was sent to Nationwide Children’s Hospital right away, which is two hours away from their family home.

Blaze has received chemotherapy, radiation, a bone marrow transplant, more chemotherapy and radiation, had both testicles removed and had a tumor removed from his eyelid. He is now in treatment at Children’s Hospital of Pennsylvania (CHOP), in the CAR T 19 study. Blaze has been in remission for almost a year, which is the longest time so far. It previously would only last months or weeks.

Lisa hopes and dreams Blaze will get to grow up and become a man. Blaze is a hero because he keeps fighting no matter what and just goes with it. Lisa wants others who may have recently received a cancer diagnosis to know that it’s a long, hard journey on your heart and soul but no matter what keep fighting and praying.

Blaze’s family received assistance from the Travel For Care program. ALSF means a lot to the family because of the help and support they received. Not only have they received gas cards and meal assistance, but they have also met with ALSF staff and continue to email for extra support.

Because Blaze and his mother have to be away from his siblings for long periods of time, he tells his mother, “God has this mom… don’t cry!”

Donate in Honor of Blaze Today!