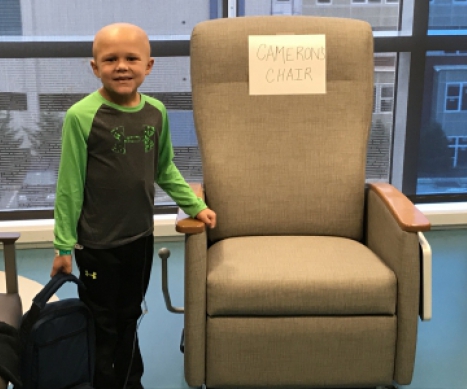 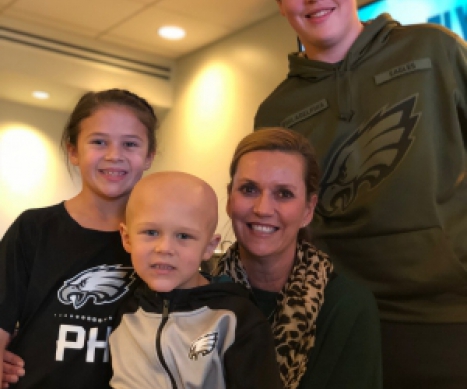 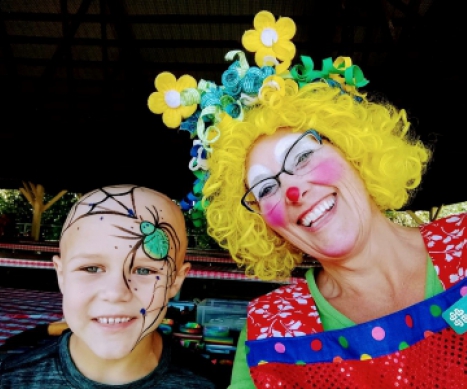 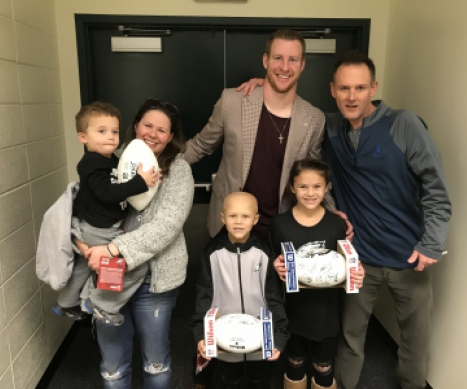 It’s tough to find a sport that Cameron (his family also calls him Cam) doesn’t love. Still, he has his favorites, including baseball, basketball and wrestling. Beyond athletics Cam also loves animals, especially pandas, koala bears and penguins. At home, he gets to snuggle on the couch with his dog, Sadie, and cat, Oreo. His wide-ranging interests also include singing, dancing and playing Roblox.

Their journey started with an itch to scratch. After attending a community day event in Quakertown, PA, Cam started complaining about a bug bite on his left upper leg. They figured some anti-itch cream would solve the problem, and then they went about their lives. Occasionally, he would complain about it, but Cam’s parents figured it just needed time to heal.

Fast forward to the end of June 2018. Cam’s mom, Kristina, noticed a large lump on his leg where he thought he got bit. They were due for a well visit the next day, so they brought it up to their doctor. She sent them to a general surgery doctor at Children’s Hospital of Philadelphia (CHOP). After meeting with him, they decided to wait things out and to see if it was just fluid build-up.

Instead, Cameron’s lump, which he nicknamed Sparky, would not go away. After an ultrasound, doctors confirmed it was a solid mass that should come out. Three days after his surgery in August, his parents heard the four words that would change their lives forever: “Your child has cancer.” They met with doctors at CHOP to learn about Cam’s treatment plan for his Ewing sarcoma.

Cam finished chemotherapy in May 2019. In his recent six month scan, he showed no evidence of disease!

Cam has displayed such incredible strength to undergo numerous surgeries, blood sticks, dressing changes and other side effects from chemo. And he continued to smile and remain optimistic throughout everything he endured. He went from being an active child ready to start first grade and baseball season to beginning a battle to kick Sparky’s butt! Immediately upon completing treatment, Cam started playing baseball again, and even made the 7U Baseball Tournament Team. He went back to school in September and placed second in his first wresting tournament!

Beyond all that, he has big dreams for the future. On top of playing professional baseball, Cam hopes to become a surgeon so he can help kids with cancer.

This journey hasn’t been easy, but Cam’s family wants other families facing a diagnosis to know that there is a whole community willing to help you. If something doesn’t seem right, don’t be afraid to ask. There are a lot of resources to help financially, so no one should feel like they are fighting alone.

Cam’s parents also never looked up anything about his diagnosis or survival rates. His mom has two mantras in life –“stay strong” and “that’s not our story.” Cam has his own unique story and that helped his mom when hearing about other children with the same diagnosis.

Alex’s Lemonade Stand Foundation (ALSF) has given his family hope that one day there can be a cure for this awful disease, or at least less harsh treatments. It also gives their family the sense of feeling like part of a community. Through the Foundation, Cam also had the chance to attend a Philadelphia Eagles game and meet one of his favorite athletes, Carson Wentz! It was a moment he’ll never forget.

Donate in Honor of Cameron Today!