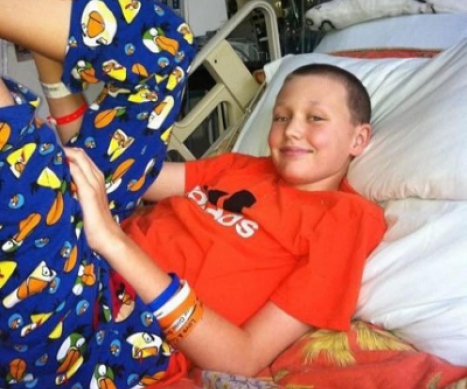 C.J. was a warm, happy and popular boy. He was quiet, yet he was a powerful leader with a magnetism that drew in kids and adults alike. He had a way of making everyone around him feel good about themselves.

C.J. was 11 years old when he had a nosebleed that wouldn't stop. His mom took him to the emergency room, where a doctor with a hunch took a blood test that revealed that C.J. had chronic myelogenous leukemia.

After he was diagnosed, C.J. had a successful bone marrow transplant, but he relapsed two months later. He went on to have two more transplants and spent 8 1/2 months in the hospital. He finally defeated his leukemia, but passed away in July of 2014 from a fungal infection he acquired during treatment.

C.J.’s mom, Heather, hopes that leukemia treatments improve so that no child has to go through a bone marrow transplant, and, of course, that there can be a cure for cancer. She advises other parents whose children have recently received a cancer diagnosis to “stay positive and take it one day at a time. Be like Dori from Finding Nemo and ‘just keep swimming.’”

C.J. faced his illness with incredible strength, a smile on his face and a sense of humor. He fought an epic battle and continued to be concerned for the wellbeing of those around him. His mother has become involved with ALSF in order to help other children affected by cancer and honor C.J.’s life.

Hero Quote: "I am a warrior. I've been fighting leukemia for over a year and I haven't given up, lost my sense of hope or humor, or my smile." –C.J. Banaszek

Donate in Honor of Casimir Today!