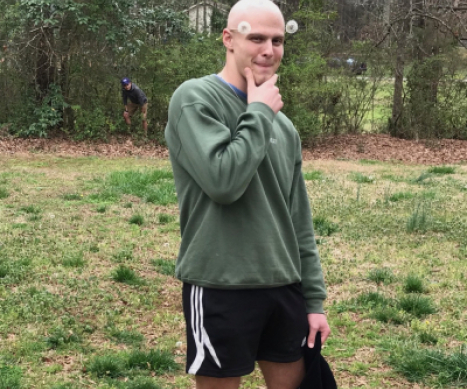 Get the facts about Germ Cell Tumor and how our research projects are making a difference.

Connor’s unfailing positivity has made him a beacon of light through one of the hardest times in his life. At 17 years old, he’s gained wisdom beyond his years from an experience no teenager should have to face.

On December 2, 2019, Connor was diagnosed with a germinoma of the central nervous system – a rare form of brain tumor. Eighteen hours after the startling news, he underwent surgery due to swelling in the brain known as hydrocephalus. Afterward, he began receiving treatments.

Connor underwent four rounds of chemotherapy and received radiation. This treatment was no small undertaking, and Connor visited Levine’s Children’s Hospital in North Carolina five days a week for four weeks of radiation. They continued as scheduled through the pandemic, which was scary, considering that the therapy could weaken his immune system.

Through all of his hardships, Connor has learned a lot. Cancer hasn’t been an easy battle, but he feels that it is now his job to offer support and understanding to others on the same journey. He often tells people to “trust in God, be positive, and always interact with others.” All of the nurses and doctors who helped Connor hold a special place in his heart, and he likes to remind others to show love and thank them.

A year ago, Connor successfully finished treatment. His condition is still monitored with regular MRIs, but he’s currently doing well. He recently celebrated his high school graduation and is collegebound for fall 2021! Connor looks back on his journey through cancer with his head held high and remains grateful for the family and friends who were there for him through it all.