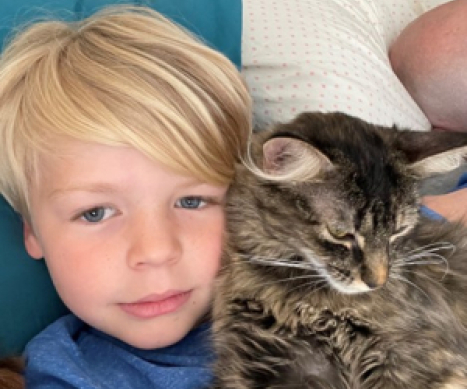 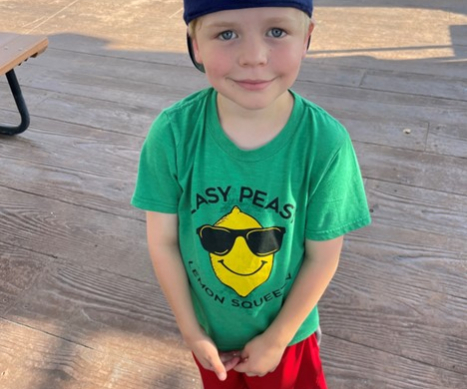 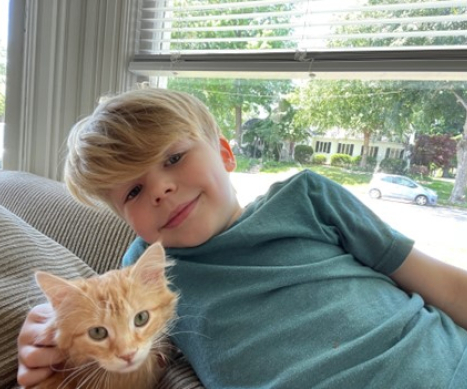 Ezra can be a bit shy, but with his family, he’s an outgoing 7-year-old. He loves animals and can be very creative when it comes to drawing. At home Ezra’s often joking, playing video games, wrestling with his brothers and sisters or cracking jokes. It was during one of these wrestling matches that his mother noticed a lump that turned out to be cancer.

Aside from some irregular sleeping and eating habits that summer, Ezra was acting like his normal self. It wasn’t until he began throwing up with the flu that his mom, Rosemary, felt something else was off. Her plans to take him to an urgent care were thrown off when he woke up feeling better the next day, but while roughhousing with his sister, Rosemary noticed a lump on his stomach. Despite the pediatrician’s initial reassurances that Ezra was probably constipated, his mom brought him in only to be sent to the hospital for X-rays and an ultrasound. Even after the results came back, it took a few more tests to confirm the diagnosis. Ezra had stage II Wilms tumor.

Since Ezra was already lethargic, anemic, and dehydrated, he was admitted to the hospital. His treatment has involved surgery and chemotherapy. After some back and forth, the doctors opted for Ezra to undergo a nephrectomy to remove one of his kidneys. The procedure was followed by 18 rounds of chemotherapy into the holiday season. That winter, Ezra received the gift of clean scans, and he has shown no evidence of disease ever since!

Rosemary’s biggest dream for Ezra is that he remains healthy and cancer-free. His family hopes to see him lead a happy life without any side effects from treatment. Despite everything Ezra has faced, his resilience has made him a hero in the eyes of his family – never letting cancer slow him down. He’s always trying new things and putting himself out there even when it’s scary. His mom feels inspired by how active and playful he is no matter what he’s been through.

Rosemary wants other families to know that there is not one “right” way of dealing with a childhood cancer diagnosis. “Just take it one day at a time and just make the best decisions you can for your kids and your family.”  She thinks it’s important to remember that there is a lot of grief to process, so it’s okay to be in survival mode sometimes. Staying as positive as possible and accepting help from others can make a big difference. “Don’t feel guilty about doing that,” she says.

For Ezra’s family, Alex’s Lemonade Stand Foundation has provided them with the opportunity to give back. In the past, they’ve helped with fundraisers at places like Hy-Vee and Panera in their area. Ezra even proudly represented kids everywhere as the childhood cancer ambassador for his local Hy-Vee store, where they shared a bit of his story and placed his picture on the wall.

Donate in Honor of Ezra Today!