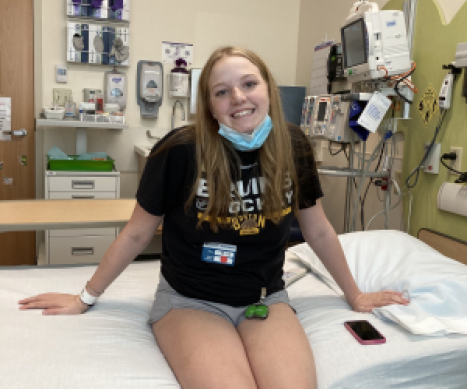 Heather is 19 years old and is currently attending the University of New Hampshire studying Veterinary Medicine.

Heather was diagnosed with acute lymphoblastic leukemia in September 2014 when she was 12. Her family had just moved from Boston to Orlando, Florida.

Heather’s treatment plan lasted over two years. Many of the first several months were spent in the hospital. It was a lot to process for a 12-year-old as well as the rest of her family. Heather has two older siblings, Grace and Lily; and at the time of Heather’s diagnosis, they were both still trying to adjust to a new life in Orlando, never mind trying to make sense of cancer, treatment, what would happen to their little sister.

Heather handled herself with such grace and her smile let you know everything was going to be okay. There were many setbacks; but she really was amazing through it all and had a great support system. Her best friend, Jenna, who lived in Boston, came down to visit quite often and was exactly what Heather needed: laughter, friendship, someone who “got” her and made her feel like a kid.
Heather took her last chemo pills on December 26, 2016.

Fast forward to December 2020. Heather was experiencing headaches, exhaustion, and vision changes. They went to the eye doctor, then to a neuro-ophthalmologist, and back to Arnold Palmer Hospital to be told her cancer has returned. This time the leukemia had presented in her central nervous system (CNS), which is why her vision was affected as well as the headaches.

Heather had her heart set on attending college in the fall and had worked so hard to achieve this. She was dual enrolled at the local college but had to withdraw from those classes due to treatment. To attend college in the fall, Heather decided on a clinical trial called CAR-T therapy. The only hospital that had this trial open was Children’s Hospital of Philadelphia, (CHOP). The family coordinated with the doctors at Arnold Palmer Hospital and CHOP and came up with a treatment plan. They went to CHOP in February 2021 and Heather had a bunch of tests as well as apheresis: a process which collects white blood cells to then be manufactured to teach the cells to recognize the cancer.

Once this was completed, Heather waited for the cells to be manufactured and headed back to CHOP in June, right after her high school graduation. She received a week of chemo prior to the infusion. On June 8, she received her T cells; then a day later, Heather developed Cytokine Release Syndrome. Heather recovered and completed six weeks of CAR-T immunotherapy.

She began her freshman year at the University of New Hampshire; but still needed to have monthly labs drawn as well as a treatment called IVIG to help with her immune system. The family coordinated with Dana-Farber Cancer Institute in Boston, and they agreed to partner with CHOP to assist with her continued treatments.

During one of the labs, B cells were detected, and Heather needed to head back to CHOP for another infusion. This was only after a month in school. She was devastated. UNH was her happy place. She was just another freshman, not the cancer kid. She met a great group of friends and finally had connections after years of isolation and lack of friends. UNH suggested she medically withdraw…Heather said, “no way. I have worked too hard and finally found my happy place. I will do whatever it takes to make this work.” That is exactly what she is doing.

Alex’s Lemonade Stand Foundation supported their family through the process and helped with the travel between three cities, which allowed Heather and her family to focus on treatment.

Lori, Heather’s mom, hopes that heather will finish college with her many new friends, experience a semester abroad, and become a veterinarian. Ultimately, her mom wants her to be happy and let this “cancer” leave her body and her mind.

“To say Heather is my hero is an understatement. I am in complete awe of her spirit, her smile, and her compassion for humanity. She LOVES being at school and I am so grateful that she is experiencing this moment in time. She cares deeply for her family and friends and is always looking for ways to show them how much she cares.”  -Heather’s Mom

Donate in Honor of Heather Today!