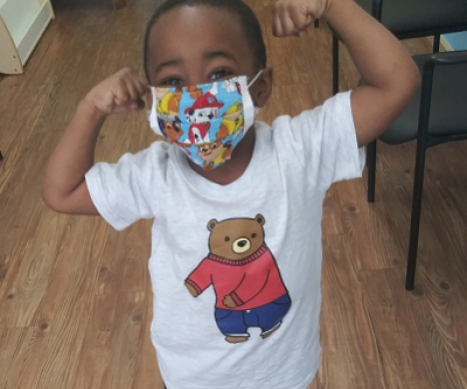 Much like other 3-year-old boys, Jonathon loves all things sports and superheroes. It may be safe to say that his heroism in his battle against cancer takes after his love for the Avengers.

In February 2019, Jonathon was rushed to the emergency room during what the doctors called a “crying spell.” He was experiencing so much pain that he would cry uncontrollably and pass out. After a quick inspection, the doctors determined that Jonathon had a double ear infection and prescribed antibiotics. But since Jonathon was born with an irregular heartbeat, his mom, Cheridah, feared that something else might be wrong. She scheduled a follow-up appointment with the pediatrician that day, and hours later the “crying spell” returned. The pediatrician recommended returning to the emergency room and this time, Cheridah demanded bloodwork.

Hours later, a nurse transferred Jonathon to Palm Beach Children’s hospital in Florida for more blood testing. This time, Jonathon was diagnosed with acute lymphoblastic leukemia. Since then, Jonathon has been receiving chemotherapy treatments at home and at the doctor’s office. He also receives IVIG infusions.

Cheridah hopes that her son will be able to lead a somewhat “normal” childhood when he has finished treatment. After childhood, Jonathon has decided he would like to be just like the doctor who treats him and pursue a career in oncology.

Jonathon’s family is grateful that his treatments have not been impacted by the current pandemic. He has been continuing to receive treatments at the doctor’s office once a month, and was recently diagnosed with hypoglycemia. Cheridah is a single mom and currently unemployed, so she feels that having Alex’s Lemonade Stand Foundation (ALSF) to lean on has been a major blessing, especially during such unprecedented times.

When it feels like the whole world is holding its breath, Cheridah thinks of organizations like ALSF as a sigh of relief.

Donate in Honor of Jonathon Today!