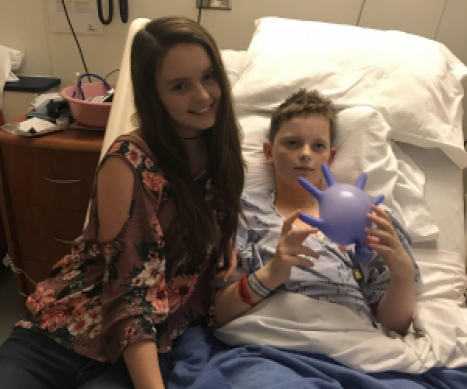 Noah Thompson loves video games, the color green and spending time with his sisters. Described by his mother as having a “very sweet soul,” he and his sisters are the best of friends. Their bond became even tighter when Noah was diagnosed with B-cell acute lymphoblastic leukemia 2.5 years ago. His family knew something was wrong when Noah stopped eating, wasn’t sleeping, and was always cold. A bone marrow biopsy revealed their worst fears – their son, brother and best buddy had cancer.

Noah was given a port and started treatment immediately, but soon faced complications that would be difficult for any adult, let alone an 11-year-old child to go through. Noah withstood a partial stomach blockage, 19 feeding tubes, an intestinal infection that caused sepsis and he coded four times, requiring help from the medical team to resuscitate him. In addition to his cancer diagnosis, Noah suffers from a pre-existing learning disability caused by a lack of blood flow to part of his brain that affects his short-term memory. Yet, with all of Noah’s obstacles, including neuropathy from chemo, he is relentlessly brave and strong.

Now 2.5 years into his 3.5-4-year treatment plan, Noah’s family is relieved that he has not missed any appointments due to COVID-19. This means that every other month, Noah travels from his home in Covington, GA about one hour south to the hospital in Atlanta for a spinal tap. At home, his daily routine includes oral chemo and nausea medication. “Noah has some days when he feels like he’s 90,” said his mom, Stephanie. “But spirit wise, he’s as good as it gets!” Stephanie says she credits Noah’s high spirits in part to his two cats and her daughters who have been inspired by Noah’s journey. In fact, Noah’s older sister is so motivated by her little brother, she changed her degree from law to nursing/oncology.

When Noah grows up, he wants to be a video game designer as well as help other kids with cancer and their families. “We are so proud of Noah and our daughters,” said Stephanie who was furloughed from her job when the pandemic began. “The ALSF COVID-19 grocery fund assistance was much appreciated and gave us a bit of breathing room.”