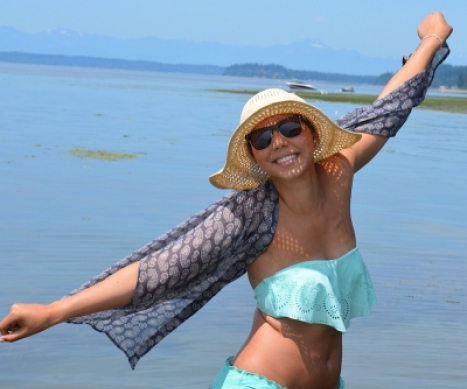 In September of 2007, Rachel Lynn Henley was a freshman in high school, thriving in her new school as a great student and a strong and talented athlete. An avid soccer player, she decided to spread her wings and try out for the cheerleading team too. After making the team, she would often leave one practice for the other, seemingly changing her persona on the short car ride between the soccer field and the cheering gym - from fierce to vivacious, in the blink of an eye. All was so good in her world.

In November 2007, at 14-years-old, Rachel's busy, happy life was turned inside-out with a cancer diagnosis. She took a hard fall on the soccer field that led us to have her sore shoulder checked at the doctor. After several visits to different doctors, we ended up at Seattle Children's Hospital where her cancer was diagnosed. Synovial sarcoma is a rare soft tissue cancer that was found in her shoulder. Rachel began treatment with doxyrubicin and ifosfomide – the standard chemotherapy protocol at the time for this type of cancer. She had several rounds of chemo, followed by six weeks of daily radiation and then surgery. More chemo followed until she completed the treatment protocol in May 2008. She was determined to be cancer free at that time.

For the next few years, life seemed to get back to normal. Rachel finished high school, continuing competitive cheering, soccer and track along the way. She started college and continued to work toward achieving her goals. Then in the spring of 2012, our family's worst nightmare came true when we learned that her cancer had returned with a vengeance. At her four year post-treatment scans, she learned the cancer was now in her lungs and eventually also in an area near her liver. Rachel had additional surgeries, radiation and numerous different types of chemotherapy. Many of these therapies were in clinical trial. Some she was on for a short time and others were effective in stabilizing her tumors for months. She had CT scans approximately every 2 months for three years, and endured a collapsed lung along the way. Prior to beginning treatment for the recurrence in 2012, she went through fertility preservation with the hope of someday being able to become a mom. Rachel's battle ended on June 2, 2015, but she continues to inspire so many, every day.

Right after her original diagnosis in 2007, Rachel and her friends and family began working on "Team Henley" to raise money for the American Cancer Society. In 2015, Rachel realized that she wanted to start her own foundation so she would be able to focus her team's fundraising efforts on pediatric cancer research as well as support for groups that brought happiness to kids and families fighting this difficult fight. And so began the Rachel Lynn Henley Foundation. When Rachel talked about her dreams for her foundation, her hopes were to give back to the many people and organizations that supported her in her fight. Since we began in July 2015, we have granted wishes, sent kids to camp, provided patient and family support to the hematology/oncology clinic at our local hospital and donated to pediatric cancer research. Our hope is to continue to do this work of her dreams, in her honor.

To Rachel, ladybugs were always a symbol of good luck and hope. It started on the day of her diagnosis in November 2007 when we found a ladybug crawling across the floor in her windowless examination room in the clinic at Seattle Children's Hospital. Since then, we found ladybugs often and they always brought a smile to Rachel's face. Traditionally, ladybugs are seen as messengers of delight and promise and they can be a reminder to us to release our worries, live our best lives and follow our dreams. This was exactly how Rachel lived. Since Rachel passed away, many of her family and friends have seen ladybugs, sometimes in the strangest of times and places. These sightings have brought tears, but also smiles and a sense of peace.

In Rachel's honor, we ask that if people see ladybugs, take a moment to think of Rachel and honor her by remembering to live their best life and follow their dreams. They can also use it as a reminder to pass this feeling on to others with a smile and the sharing of love and encouragement. That would be a tremendous legacy to Rachel and to other young cancer fighters.

Rachel endured this incredible challenge with her beautiful smile and positive spirit intact. She chose to live her life to its fullest and encourage others to do the same. Instead of turning inward and feeling sorry for herself, she made the decision to make a positive difference in the world. She wanted to give back as so many others had done for her. That she could do that in the face of fear and pain amazes me every day of my life. The world will never be the same, in the best way possible.

From one family who has been through this to another, it is about providing hope to other families and hope that we can make it so that others don't have to go through this in the future.  Hope and positivity are truly amazing things. You will read about and hear a lot of stories as you go down this path. But never forget that this is your story, and there are a lot of truly amazing people that you will find along the way that are going to help you write it.

Donate in Honor of Rachel Today!