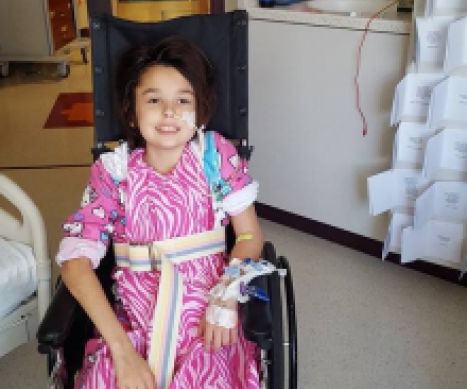 Riley is a spunky 11-year-old girl who loves Bruno Mars, the outdoors, animals and traveling. She is dedicated to anything she does and loves helping her community.

In December 2016, Riley was taken to Children’s Mercy Hospital in Kansas City after months of trying to find answers for why her side was locking up. Within 30 minutes of testing, Riley was diagnosed with grade 1 pilocytic astrocytoma located on her brainstem. Two days later, she went in for surgery to get a biopsy and try to debulk the tumor as much as possible. She started chemotherapy treatments in January. In April, she had her first follow-up MRI that showed there was growth of two new cysts that are currently being watched.

Riley doesn’t have any long-term expectations from the doctors due to the location of her tumor. Riley and her family have been spending as much time together as they can, cherishing every moment. Her mother says that she inspires everyone she meets and she is proud that Riley handled her diagnosis with a lot of faith in God which has helped their entire family through this process.

Riley is undergoing chemotherapy and her mother hopes that she will get through this battle and live as normal a life as possible after this. Riley is her mom’s hero because she is going through the worst thing in the world, but is still working to help others. Right now, she is in the process of starting a foundation named “Riley’s Wraps Against Cancer” with the mission that no child should fight cancer alone. She lives by that motto and is collecting hats, scarves and cloth medical masks for children with cancer.

“No child should ever fight cancer alone.” – Riley

Donate in Honor of Riley Today!