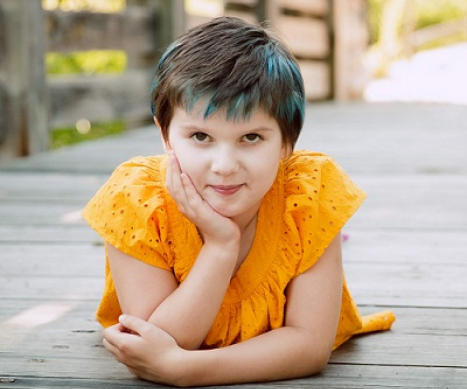 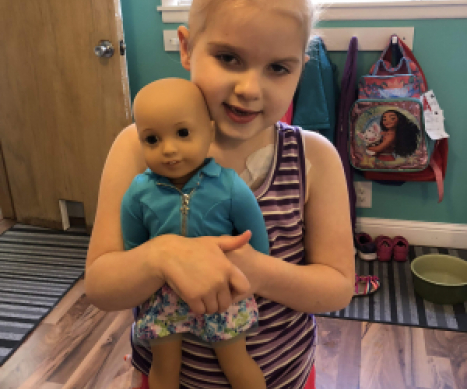 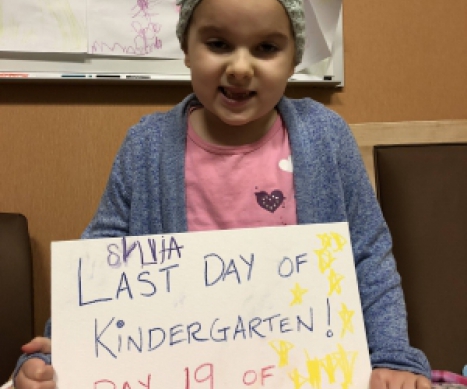 Sylvia has a silly streak, but she is incredibly thoughtful and caring for a 8 year old. Her love of animals has helped her gain even more knowledge about them than most adults – she even stumped her preschool teacher! She likes to swim and hopes to be a scuba diver when she grows up. During her time in the hospital fighting medulloblastoma, she often built Lego sets too, stoking her endless appetite to learn.

Before her diagnosis, Sylvia started having frequent headaches that got more severe over time. Suddenly, she began to vomit almost daily. Her pediatrician recommended an MRI, but didn’t suspect a brain tumor. Initially, they thought it was just a food allergy. Finally, she had an MRI that revealed the tumor and doctors diagnosed her with medulloblastoma. Two days later, they surgically removed Sylvia’s tumor.

Her treatment consisted of 30 rounds of proton radiation and four rounds of chemo. While she is finished with that portion of treatment, she is still doing occupational and physical therapy twice a week. She recently had scans three months since completing treatment and they all came back clear. Today, Sylvia remains cancer-free! However, during radiation, some of Sylvia’s cranial nerves were damaged and that has affected her eye movements. She is currently attending weekly vision therapy sessions to help her eyes work better together. Despite it all, Sylvia is swimming again, has joined Girl Scouts and the kids’ choir at church, and is as happy as ever.

Their family’s greatest hope is that Sylvia remains cancer-free and that her body grows strong again. They want to use her story to help other families facing a cancer diagnosis too. With time, they hope there can be a cure and treatment that won’t cause so many terrible side effects.

Sylvia is her family’s hero because despite all she went through, she kept a positive attitude. She has been kind and caring, often thanking her doctors and nurses. Not once has she let cancer define her.

They have simple advice to anyone facing this situation: You are stronger than you think. When people offer to help, say yes. You can’t do this alone - rely on your family, friends and community to get through it.

For Sylvia’s family, Alex’s Lemonade Stand Foundation symbolizes a hope for a cure. They are so glad that it exists to raise awareness about pediatric cancer and provide support for families going through a difficult time. They had several friends hold a lemonade stand in Sylvia's honor too.

Donate in Honor of Sylvia Today!