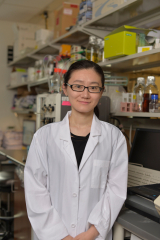 Background
MLL1, which is found in a large number of translocations associated with childhood leukemia, is post transcriptionally processed and cleaved by Threonine aspartase 1 (taspase1). But the biological significance of the cleavage of MLL1 by taspase1 in mammalian cells remains debated due to the different murine models used in previous studies. My preliminary studies in Shilatifard's laboratory demonstrated that taspase1 cleavage destabilized the MLL1 protein and primed the protein to its degradation pathways without affecting its nuclear localization and activation. I have further demonstrated that the phosphorylation on MLL1 flanking the taspase1 cleavage site is a crucial pre-requisite for taspase1-mediated cleavage, thus providing us with a molecular means regulating the stability of MLL1. Our lab's recent study published in Cell in 2017 demonstrated that MLL1 stability controls a precise process that determines its activity and occupancy at the target genes.

Project Goal
The functions of MLL1 in leukemic pathogenesis are substantially affected if the MLL degradation machinery is altered. Therefore, I will take advantage of my findings of the role of taspase1 in the regulation of MLL1 stability through the biological function of MLL1 phosphorylation, coupled with taspase1 cleavage to develop new therapeutic approaches for the treatment of MLL translocation-based leukemia and in tumors with taspase1 overexpression.