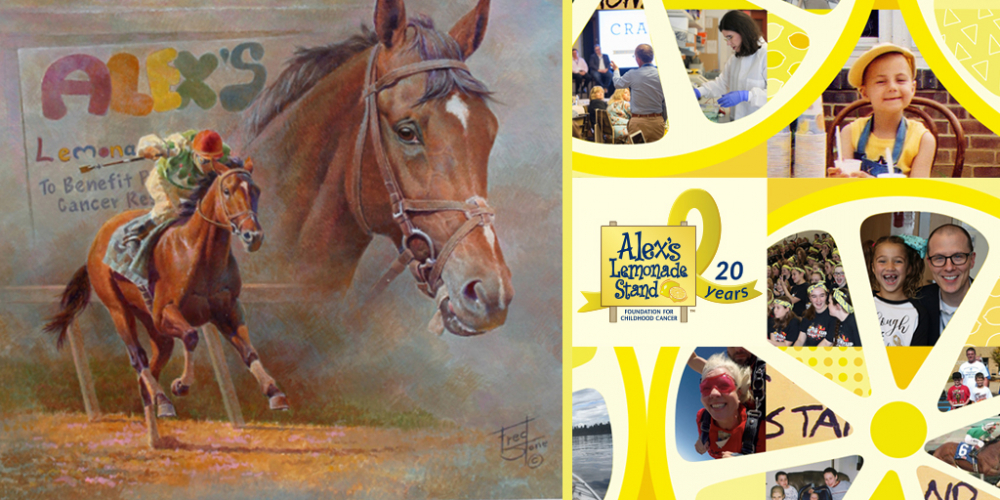 There wasn’t anything jockey Jeremy Rose could do when his horse, Afleet Alex, started to stumble several lengths into The Preakness. All he could do was hope. Hope that Afleet Alex would recover, hope the stumble wouldn’t leave him in the way of a dozen trampling horses, hope that somehow, someway, the horse would make it.

Thankfully, on that May day in 2005, another Alex, Alex Scott, was looking out for the horse from above. Afleet Alex went on to win that very same race he nearly tumbled in, defying all expectations from onlookers. That horse didn’t just carry with it the dreams of co-owners Chuck Zacney, Terese and Bob Brittingham, Joe Lerro, Joe Judge and Jen Reeves, but also the legacy of Alex Scott and her fight against childhood cancer.

How the two came together was a matter of chance. Chuck read a story about Alex’s Lemonade Stand in a local newspaper after one of their races in Saratoga, NY. After bringing it to the partners, they wanted to support it in some way. Trainer Tim Richey also felt a special bond with this horse, who he identfied early on as something special, but was even more dedicated to ensuring his success knowing the legacy of Alex Scott was riding on Afleet Alex's performance.

So, in the early races, a portion of the winnings were donated to Alex's Lemonade Stand, but they were donated anonymously. As Afleet Alex kept winning and winning, Chuck reached out to Alex’s mom, Liz, to see if they could make the connection official in an effort to bring awareness to Alex Scott's efforts to cure pediatric cancer. The rest is history...

Alex had passed away in 2004 from neuroblastoma, but her parents, Liz and Jay, carried on her mission to cure childhood cancer. They were invited to set up a lemonade stand at the 2005 Kentucky Derby and exposed Alex’s Lemonade Stand Foundation to an entirely new set of supporters.

Afterwards, the Scotts headed to The Preakness Stakes and saw that climactic, near-catastrophic tumble up close. Terese Brittingham remembers it vividly.

“We were all in shock. Even after he crossed the finish line, we were all in disbelief and concerned about him… when they replay that today it still gives us goosebumps.”

The connection between the two Alexes was forged then and there; their legacies forever intertwined. Jockey Jeremy Rose even said, “An angel kept me safe. There was someone up there who helped us, little Alex kept me on.”

While Afleet Alex’s story captured the nation, it also brought more attention to the little Alex whose mission had touched everyone’s hearts. “She [wasn’t] doing it because she wanted to feel better or she wanted some cure for herself. It was so selfless, and she was very young. That is quite a story,” said Terese.

Afleet Alex then went on to win The Belmont Stakes too. That day, lemonade stands went up at racetracks across the country. However, Liz and Jay couldn’t set up their stand at Belmont, sending relatives instead. That was the day of Alex’s “Original” Lemonade Stand. It would also be the first time they held the annual event without Alex there.

“While there were tears shed that day, Afleet Alex gave us hope for the future,” said Jay, Alex’s dad. “When post time finally arrived, we were still cleaning up from the lemonade stand, but we all huddled inside of the elementary school where Alex’s stand is held and watched on a TV provided for just this purpose.”

Not only did Afleet Alex prevail in Belmont, it was a massive victory for Alex’s Lemonade Stand too, raising more than one million dollars in a single day.

"It was as if all of the stars were aligned," Zacney said. "If not for Afleet Alex's success, it would still have been a great story, but his winning two Triple Crown races put it over the top."

Their legacies of massive change, hope and inspiration, continue today. The exposure, funds and experience of Afleet Alex helped Alex’s Lemonade Stand turn into Alex’s Lemonade Stand Foundation – the nonprofit that carries on its founder’s mission to find safer, more effective treatments for all kids with cancer.

Today, Afleet Alex is no longer roaring through racetracks, having retired in 2005 to a farm in Kentucky. But Afleet Alex’s memory continues to bring supporters comfort.

Terese recalls one visit to Gainesway Farm for his debut when she spotted two women openly weeping in front of the horse. They were sisters, and one had recently been diagnosed with cancer. They had driven from Maine to Kentucky just to see Afleet Alex.

“In her heart of hearts, she felt that if she could just touch that horse, she could be cured. She believed that,” said Terese.