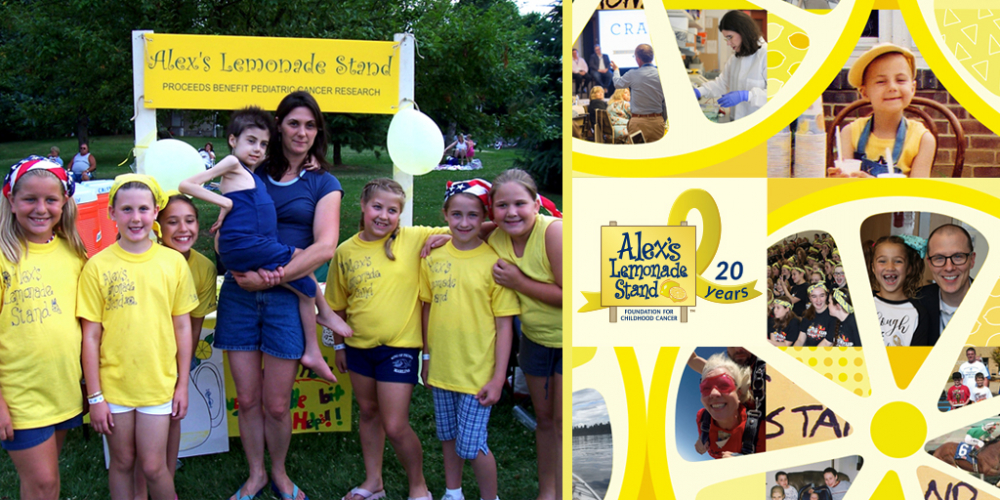 Courtney, who was 10 years old at the time, thought $100 would be an amazing amount to raise for ALSF.

That night, Courtney and a group of five friends, who were dubbed the King of Prussia Lemonade Girls, kept filling shoebox after shoebox with donations.  By the end of the night, the stand had raised $1,000.

The girls continued to hold stands every single week of the summer of 2004 — raising thousands of dollars each week.

The King of Prussia Lemonade Girls, who in addition to Courtney included, Michaela Kiczula, Abby Mina, Laura (McCaughey) Meiselwitz, Elissa Salamy and Jenny (Hayes) Laughlin, made their stand a community fixture. The team of rising 5th graders not only worked the lemonade stand at the concert series, they also reached out to their extended community to get signs, lemonade, cups, plates and food donated by local businesses. Each week, they’d fill their shoebox with donations.

At their July 4th stand — one of the busiest of that summer, Courtney’s mom noticed some special guests.

“I remember it was so busy and amongst the hustle and the bustle, my mom called me over and said, ‘Courtney, look over there.’ And it was Alex,” said Courtney.

The entire Scott family was there — Liz, Jay, Patrick, Eddie, Joey and of course, Alex. The Scott’s were signing copies of the book “Alex and the Amazing Lemonade Stand.” They came over to Courtney’s stand and gave each girl a signed copy of the book.

For Courtney, who was then 10 years old and even now for grown-up Courtney, meeting Alex and hosting lemonade stands to support ALSF was a game changer.

“Alex continues to this day to be my role model, in the way that she just cares for everyone else,” said Courtney.

Courtney, together with her friends and community, went on to host 10 stands that first summer. They kept hosting and eventually raised more than $35,000 for the foundation. Courtney kept a notebook filled with lists of every sponsor, every newspaper article and every clipping about Alex’s Lemonade Stand Foundation (ALSF) from those summers hosting stands.

“In Alex, I saw such compassion and love and care for other people.  Nothing ever seemed to stop her. Alex sparked me to always find ways to get involved—whether it was hosting lemonade stands or choosing my college major or serving as a missionary and now, my call to be a pastor,” said Courtney, who is currently training to be a Lutheran pastor.

“I already saw that I could do a lot of good as one person raising money. But I also knew that if I used my faith, I could inspire other people to do a lot of good, too,” said Courtney.

Courtney continues to stay connected to ALSF and is a frequent visitor at Alex’s “Original” Lemonade Stand. She has been a student and a speaker at the ALSF Student Leadership Academy. In 2006, the King of Prussia Lemonade Girls were each honored with the Philadelphia 76ers Hometown Heroes Award in honor of Alex.

“It’s been incredible to see how the Foundation has grown. It is amazing to see how Alex’s little lemonade stand has turned into walks and runs, the Lemon Ball and the partnerships with other organizations. The way that the lemon has gone from a fruit in a fridge to a symbol of hope and awareness for kids battling cancer — it all started with one lemonade stand,” said Courtney.