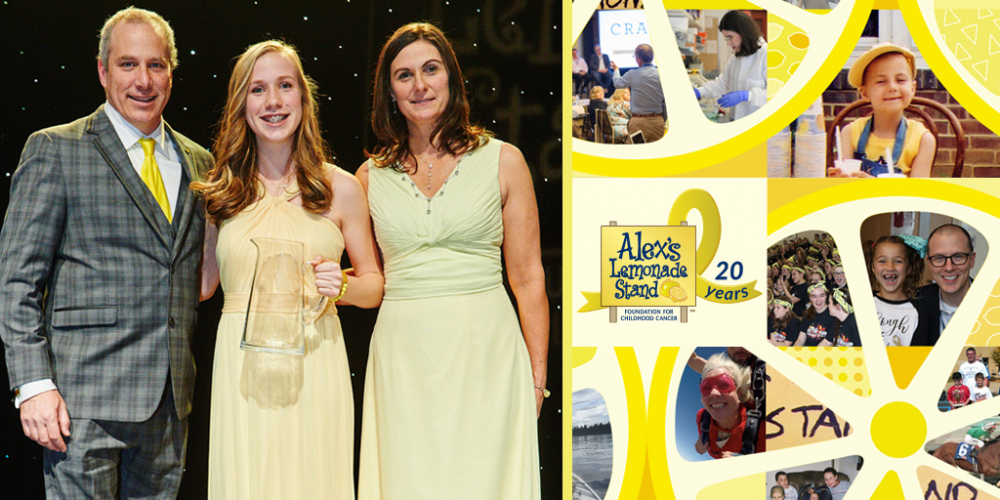 Fourteen years is a long time to dedicate to anything. Although 16-year-old Sydnie Bayles has never experienced childhood cancer herself, she’s spent most of her young life advocating for the cause that she wants to see cured in her lifetime – pediatric cancer research.

When Sydnie was 2, her mom, Morreen, had just returned from an event where she heard Jay Scott speak about his daughter, Alex. Morreen was scheduled to present at the conference as well, but was so moved by the speech, she instead hurried home to share what she’d heard with her family. Sydnie had recently lost her grandmother to cancer, and Morreen wanted to use her family’s grief for good – to turn lemons into lemonade. That was when Sydnie spoke the three words that would catalyze her next 14 years of positive action: “I sell lemonade!”

Choosing Alex’s Lemonade Stand Foundation (ALSF) was a no-brainer. One lemonade stand turned into two, turned into ten, turned into twenty, and more than 150 stands later, Sydnie was not just raising awareness, she was inspiring others to do the same. Volunteers of all ages have come to her for training to help kids and give back. Sydnie has loved every minute of it. Bringing her community together for a cause that means so much to her is her favorite part of being a stand host.

And as her stands grew, so did her goal. One day, a friend’s parents challenged Sydnie to raise one million dollars by the time she graduated high school. This lofty sum was the same amount Alex challenged herself to raise after hosting her first stands, and Sydnie felt honored for the chance to do it herself.

“What spoke to me the most about Alex’s story was the confidence and bravery and strength she had, and how selfless she was to continue raising money for those in her hospital,” said Sydnie. “Although we are $670,000 away from this goal, and I have two short years until I graduate, this didn’t stop Alex, so it won’t stop me.”

That determination and joy she feels is what keeps Sydnie on track. When asked why she’s raising so much money for ALSF when she doesn’t have cancer herself, her reply is simple, “Because I can.”

However, in the future, she hopes she won’t need to fundraise anymore. Hosting her lemonade stands and seeing the ripple effect she’s created is gratifying, but it is all so that one day cures can be found.

Sydnie’s dedication as a long-time stand host earned her the 2018 Lemon Ball Stand Host of the Year Award, and she continues to inspire others to this day. It isn’t hard to understand why – Sydnie still believes a lemonade stand can cure cancer.