Gavin Morris was born on August 24, 2009 to Chad and Tosha Morris.  He was always a healthy, happy, little boy.  Gavin immediately became the center of Tosha and Chad's world.

On August 15, 2011 Chad and Tosha were blessed with another beautiful, healthy son they named Greyson.  Gavin was thrilled to welcome his baby brother to the family.

In May of 2012, Gavin was diagnosed with neuroblastoma at the age of two-and-a-half, after experiencing night sweats, frequent wakeups, and tooth and ear pain. He was treated with six rounds of chemotherapy, stem cell harvest and rescue, an adrenalectomy, 12 radiation treatments and two rounds of antibody therapy.  After all the treatments, the family was overjoyed when Gavin was declared to have no evidence of disease in February of 2013.

Only a few months later, Gavin developed a nodule on his head which began to grow. His family knew immediately that he had relapsed. They relocated to Philadelphia so Gavin could receive chemotherapy and MIBG therapy at CHOP. At CHOP, they first heard about Alex’s Lemonade Stand Foundation and decorated a lemon head for Alex’s Original Lemonade Stand.

Gavin continued to receive treatment for several months, showing remarkable courage, strength, and hope.  Sadly, on March 10, 2014 Gavin passed peacefully with his family by his side.   No child could have ever been more loved.

Gavin was a child that  could light up the room with his presence.  A light so bright and so beautiful, that nothing will dim it.  Gavin's parents have endured a loss that to almost all of us, is unimaginable.  But, they stand in hope, strength and courage---ready to fight and ready to win for other children with neuroblastoma through the Gavin Strong Fund for Neuroblastoma Research at Alex’s Lemonade Stand Foundation .

Donations made to the Gavin Strong Fund will be used to fund research into new cures for neuroblastoma. 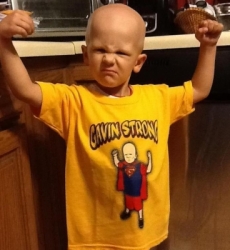 Donate now or register to hold your own lemonade stand or event to support the Gavin Strong Fund for Neuroblastoma Research!