Above, this map shows the RNA clustering of childhood cancer PDX models. RNA works as a messenger inside of cells, carrying instructions from DNA for controlling cellular activities, like cell division.

In 2000, the first draft of the map of human genome—a mosaic representation of characteristics of what makes our biology uniquely human—was released. The map paved the way for more genomics research in several fields ranging from human biology to agriculture and gave scientists models of genetically normal cells which they could compare to abnormal cells, like those cells that make childhood cancer so deadly.

Now, in 2018, an ALSF funded-research project has resulted in the release of over 270 genetic sequences of 25 different types of childhood cancer used routinely by the National Cancer Institute’s Pediatric Preclinical Testing Consortium (PPTC). Each unique tumor model and its biological characteristic data is available to all academically qualified petitioners—opening the door for breakthroughs in childhood cancer research.

Keep reading to learn how cures are getting closer, one childhood cancer genome at a time.

The story behind the 270 models begins with the PPTC.

Founded in 2015 and funded by the National Cancer Institute, the consortium works to develop reliable preclinical testing data for potential pediatric cancer drugs. There are hundreds, maybe thousands of potential cancer drugs—making the study of each drug in a pediatric clinical trial impossible. The PPTC narrows down the list, providing researchers with reliable drug effectiveness data that they can use to accelerate research from “bench to bedside;” bringing science out of the lab and into the clinic. The models studied are directly derived from childhood cancers at diagnosis or relapse, and thus are directly representative of the types of cancers treated in clinical trials.

However, while there is a large pool of potential drugs, there was not a large pool of accurate pediatric tumor models for which to test the drugs. This has long been a struggle for the pediatric oncology research community. Over 14.1 million people are diagnosed with cancer each year worldwide, but only 250,000 of those cases are pediatric cancer. The pool of potential tumors to model is small and obtaining viable tumor cells is difficult, especially for some types of pediatric cancers like spinal cord tumors where securing tissue samples is tricky because of the tumor’s location.

The PPTC had an idea for a new major effort, the Pediatric Preclinical Genomic Characterization Project, which 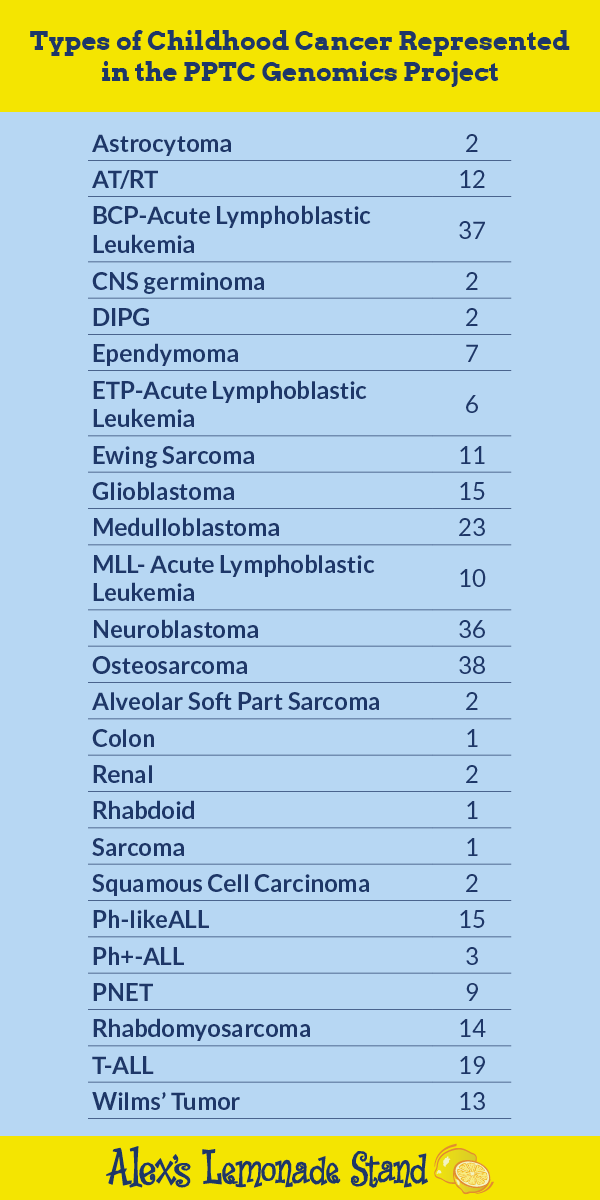 sought to characterize the tumor samples being used in drug testing. These patient-derived xenograft (PDX) childhood cancer models were being used routinely, but the majority did not have detailed genetic data available.

The potential was enormous: with a critical mass of PDX models made available to the scientific community, the PPTC could accelerate the route to clinical trials much more rapidly than ever before, bringing potentially lifesaving treatment to children waiting desperately for cures.

There was one catch: there was no funding available for a PDX sequencing project. That’s when ALSF entered the picture.

The Foundation learned about the PPTC and its desire to generate high-quality PDX genetic data to streamline science’s understanding of why novel treatments work in some cases, but do not work in others, and immediately recognized its promise.

“ALSF has a legacy of filling critical research and family services gaps in the childhood cancer community,” said Liz Scott, Co-Executive Director of ALSF.  “We knew that funding the PPTC’s genomic sequencing project had the potential to spark long-lasting impact, collaborative efforts and ultimately advance the pace of finding cures for all kids with cancer.”

Legacies of Hope
With the ALSF funding, the PPTC could characterize the stored samples that had been donated by children battling pediatric cancer. Some donations came while a child was in treatment, with an institution’s requested permission to use extra tumor tissue that was not needed for diagnosis or treatment protocol, for research.

Other donations came from families eager to find cures even when it was too late for their own child. These profound gifts, given at the time of death, left behind a legacy of hope waiting to be unlocked.

The PPTC has access to over 400 samples representing 25 different types of childhood cancer, stored at -80℃ in its five locations at institutions in the United States and also in Australia, and continues to generate more, often in collaboration with Dr. Patrick Reynolds who receives ALSF funding for the Childhood Cancer Repository where many genetic models are generated. The vast majority of the samples represent relapsed disease and have the promise of modeling childhood cancers at the time that many new investigational treatments are tried in the clinic in Phase 1 trials.

While the PPTC could have tried to establish the tumor lines in a test tube or dish, the researchers leading the project knew from prior experience that growing tumors in artificial environments could lead to the generation of different mutations in revolt to their new homes. These mutations would lead to inauthentic cell lines and muddy the search for drugs that could work.

Accelerating the Clinical Trial Process
Bringing the right drugs to the clinic has long been a struggle for pediatric oncology researchers.

The first priority is to ensure a patient’s safety in a clinical trial by adhering to specific safeguards before the trial begins and during the trial. But a safe drug is not necessarily effective and can offer false hope to patients who are enrolled in clinical trials after one relapse—or several.

Using the PDX models, researchers could discover the “good drugs”—the drugs most likely to be safe and effective in killing cancer cells, and also discover the “bad drugs”—those that are not effective and those that might even result in resistant disease.

The models also give researchers the opportunity to continue to move away from treating diseases by name and begin treating the specific genetic lesions that might drive cancer growth. It is the literal meaning of “killing two birds with one stone”— two different types of cancers may share a genetic trait and in turn, could be sensitive to the same drug.

“With good models, we can begin designing experiments more robustly and begin getting the right drugs to the clinic and to children quickly,” said Dr. John Maris, MD, of ALSF’s Scientific Advisory Board and Children’s Hospital of Philadelphia’s neuroblastoma representative in the PPTC.

Researchers worked to filter out any noise or irregularities in the final data, using existing cancer cell knowledge and past research. They have ensured the models matched their cells of origin and have retained known cancer driver mutations over time.

The PPTC began using the data immediately—fulfilling its mission of matching drugs to genetic targets and testing in advance of human clinical trials.

Now, eighteen months after the PPTC commenced the PDX project, other scientists now have the same opportunity. The data, which was released on July 9, 2018, is available to all academically qualified petitioners through the PedcBioPortal for Childhood Cancer Genomics (pedcBio portal). Raw characterization data will be available on the database of Genotypes and Phenotypes (dbGaP) in the coming months. Tissue samples will be available by request—for just the cost of postage to ship.

“When childhood cancer relapses, it can become lethal,” said Dr. Maris. “But today, the scientific community has open access to deep genetic profiling that will help overcome some of the major problems we have when treating childhood cancer. We’ve now accelerated years ahead in our search for cures.”

Read more about the PPTC project, as well as other innovative ALSF research here.