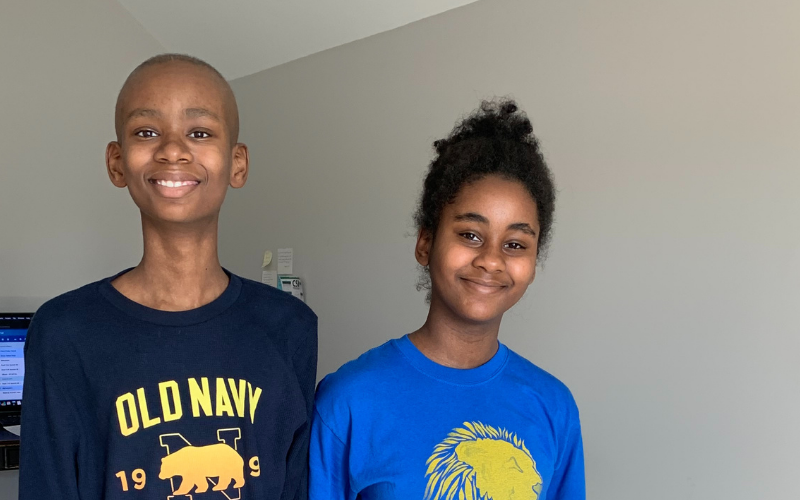 When 14-year-old Hope Miller was in seventh grade, a test in her PE class led to an early dismissal from school. Her blood pressure and pulse were elevated, and she had difficulty breathing. Over the next three months, a visit to her primary care physician and four bronchoscopies would confirm a diagnosis: mucoepidermoid carcinoma, a rare form of lung cancer that made itself at home in Hope's left lung, causing it to collapse.

Hope had to have her left lung removed, along with the lining of the lung and surrounding lymph nodes.

Her older brother CJ was by her side — visiting the hospital, telling jokes, eating snacks with Hope and lightening her mood.

“It hurt me because I did not like to see Hope in pain,” said CJ, who is 15 years old and in ninth grade.

After surgery, Hope was declared cancer-free and the family turned its attention to helping her recover.

One month later, it was CJ who was sick.

It started with high fevers, joint pain and a loss of appetite. At first, doctors thought he had a virus, but then the shocking diagnosis came: CJ had acute lymphoblastic leukemia (ALL).

His parents — Deidra and Chris Miller — were in disbelief.

CJ began frontline treatment for ALL right away and is now in the maintenance phase of treatment.

"It really opened my eyes to how tough it could be watching Hope go through what she had to go through,” said CJ.

Hope, who continued to work on her recovery, also turned her energy to supporting her older brother. Drawing on her own journey, Hope has been there to comfort him when he is struggling and to visit him when treatment requires hospitalization.

“I like to pay more attention to what I am doing. I do not rough house with him as much as before cancer because I do not want to severely hurt him,” said Hope.

Chris says that Hope and CJ’s bond has grown and changed since their cancer diagnoses.

“They are much more loving, long suffering and compassionate with each other,” said Chris.

For CJ, ALL treatment is long — he won’t finish maintenance chemotherapy until June 2022. Hope has a similar long road focusing on increasing the capacity of her remaining lung. But, despite cancer being present in both their lives, the duo continues to focus on regular teenage things — playing video games, binge-watching their favorite shows and joking around with each other.

Honor your sibling by making a donation in their name and we'll send them a personal eCard designed by SuperSib Sawyer! Complete the online donation form and provide a few details about your sibling. Then we’ll take care of the rest! Show your sibling you care with a gift that brings hope and support to SuperSibs.

Donate In Your Sibling's Honor