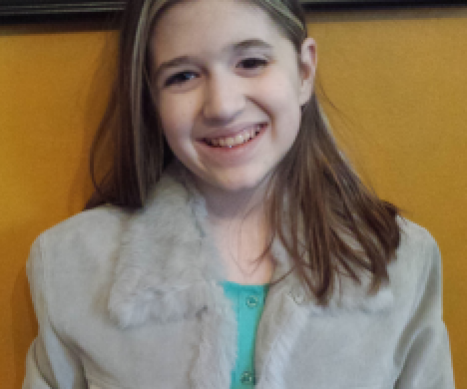 Althea was just one-year-old when her cancer was found. Since being diagnosed in January of 2004, Althea has been very strong. She has been through countless tests, scans, shots, drugs, side effects, hospital stays, surgeries, infections, and clinics... with courage, and with a smile.

In February of 2004, she had the PNET tumor removed along with her left eye and optic nerve. She completed 6 cycles of intensive chemotherapy, followed by a stem cell transplant. She had surgery to reopen her eyelid in February 2005. She wears a prosthetic left eye and is in good health. Today, Althea is in the seventh grade, is an avid reader, and loves archery, swimming, mythology and her cat.

Althea is an ongoing fundraiser for Alex's Lemonade Stand Foundation. She was honored by the Foundation in 2008, 2010, 2011 as one of the top 100 stands. As of December 2015, Althea has helped raise more than $50,000 for childhood cancer research!

She is proud to be a part of Alex's Lemonade Stand because it helps so many kids and benefits many hospitals across the country, including where Althea received her treatment.

Donate in Honor of Althea Today!