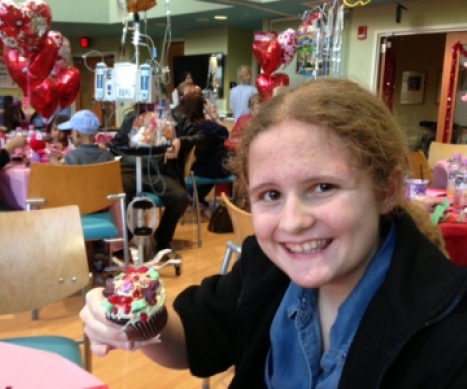 Alyssa is 12 and enjoys reading, playing piano, playing volleyball and spending time with friends. She loves Disney's Goofy, Wheat Thins, horses and God. There’s no good timing where cancer is concerned, but for Alyssa and her family, her sickness came at a particularly tough time. The family had just moved to a new community two weeks before school started in August 2013. Alyssa had just started middle school at a new school. Everything – their home, town, job and church – was new and unfamiliar. Alyssa began experiencing headaches, which seemed connected to the stress of getting settled and coping with middle school exams for the first time.

On the morning of her birthday, January 7, she spent the day in bed throwing up with a headache. After a visit to the doctor, she was sent for a CT scan the next morning, and after the scan was immediately admitted to MD Anderson Cancer Center at the University of Texas. She was diagnosed with medulloblastoma, a brain cancer. Her family learned that Alyssa has Li-Fraumeni Syndrome, a rare genetic disorder that predisposes those who have it to an increased risk of developing cancer. Her mom, Sandy, was diagnosed at 24 but did not know that it was passed onto Alyssa. The family have since learned that her little sister has it as well.

Even in the midst of tremendous stress and her own sickness, Alyssa has acted with amazing generosity and a spirit of giving back. When she received a wish from the Make-a-Wish Foundation, she said, "The only reason I got this wish is because I got sick. I should use it to help someone. I didn't earn it." She decided her wish was to dig a well in Africa for a village that doesn't have water. She and her family will go next summer to see Alyssa’s well.

Alyssa has been treated with 30 days of proton radiation and outpatient chemo. She is now halfway through chemo treatment, which involves both inpatient and outpatient chemo. She has developed neutropenic fever as a side effect of the chemo several times and been hospitalized for it. Amazingly, she still got straight A's last year in spite of all she was going through!

Alyssa’s family hopes or better treatments and earlier detection of cancer.  Long term, Alyssa’s dad hopes gene manipulation can be done to repair/replace the broken genes that cause cancer, such as P53 in people with Li-Fraumeni Syndrome.

A group of online Disney friends of the Ferguson family are participating in Alex’s Million Mile in honor of Alyssa.

Meanwhile Alyssa and her family are trying to live as normally as they can and not let cancer take over. Her dad advises others facing a cancer diagnosis: “Take time for fun. Don't let it rob your joy today because of what you fear tomorrow.”

Donate in Honor of Alyssa Today!