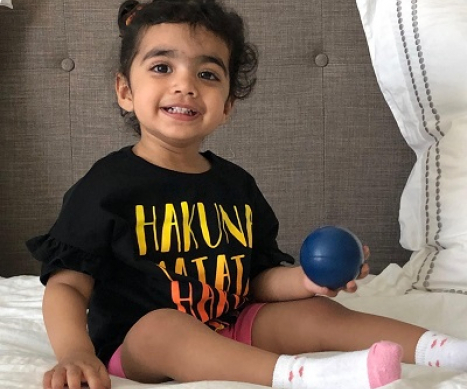 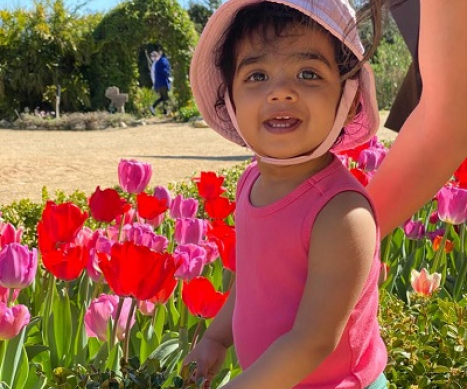 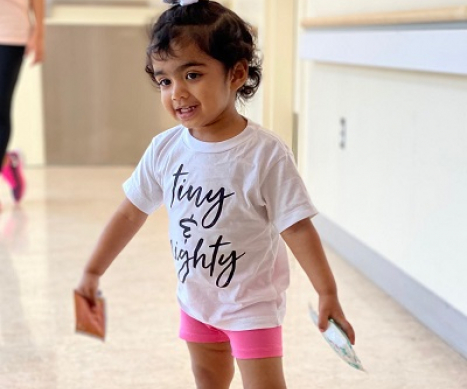 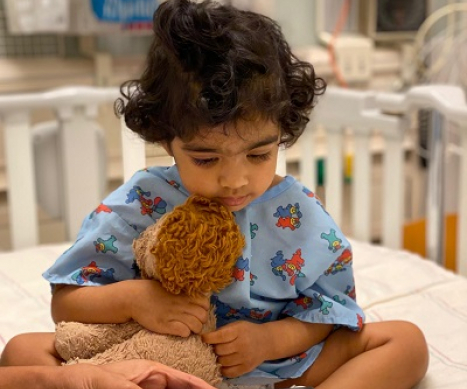 Amara is a feisty, funny, bold and bubbly toddler. She’s full of energy, active and ever curious about the world around her. She loves giving kisses (specifically two, one on each cheek) to everyone she loves. She’s got a great sense of humor, is always smiling and trying to make others smile. She has a whole parade of stuffed animals she loves to play with, she’s got names for each one, and loves cuddling up on the couch or crib with them all. She loves chasing the cats and dogs in the neighborhood. Her favorite place to be is on the beach, building sandcastles with her red bucket, digging for crabs along the water with her Dada, and chasing the birds to say “hi” along the shore. She’s the strongest and most resilient person her family knows, and she’s barely 2 years old. In the face of every hospital visit she’s shown so much strength, bravery and spirit.

Amara was a healthy, active and precocious baby – she had started to crawl at 7 months, started speaking at 12 months and took her first steps at 14 months. But on March 23, 2021, when Amara was just shy of 18 months, her parents noticed a tremor in her left leg. Soon, her left arm started to tremor and they took her to the emergency room at UCLA Santa Monica. Within a week, she lost the ability to walk without support. She underwent numerous tests, including an MRI of her brain and cervical spine, a lumbar puncture, an X-ray of her hip and pelvis to check for fractures, an EEG to check for seizures, numerous blood draws and urine tests to check for infections, and an abdominal ultrasound to check for a tumor. All her tests came back clean.

After a week in the hospital, she was wrongfully diagnosed with acute cerebellar ataxia and was sent home to recover. Her parents were told she may get worse but that the condition would improve on its own. A few days later, they started to notice abnormal eye movements that they later came to know as opsoclonus. At home, Amara experienced severe sleep disturbances and was irritable to the point of being inconsolable. She could no longer sit without support. She lost the ability to swallow her food and was only able to eat baby cereal. Desperate late-night Google searches led her parents to believe she had opsoclonus myoclonus syndrome (a rare one-in-10-million syndrome often associated with neuroblastoma) and then took her to UCLA Mattel Children’s Hospital on April 8, 2021, where they were admitted for almost a month.

The next day, she was sedated for an MRI of her chest and abdomen, and had another lumbar puncture, as well as additional blood and urine tests. The MRI found no sign of a tumor, but she was diagnosed with opsoclonus myoclonus syndrome upon neurological examination and was given IV Immunoglobulins, followed by steroids and Rituximab. On April 15, she had an MIBG nuclear medicine scan which identified a neuroblastoma tumor behind her liver. On April 19, she underwent a five-hour surgery to remove the tumor from what her parents were told was a tricky place near her major blood vessels. Her surgery was successful, and the tumor was resected. The oncology team would be continuing follow-up MRIs every three months.

Amara is now being seen by Dr. Wendy Mitchell at CHLA for the duration of her OMS journey, and her family is so grateful to have access to a worldwide OMS expert, given how rare Amara’s condition is. Amara will also continue to receive care under the guidance of the neurology, oncology and rheumatology teams at UCLA Mattel Children’s Hospital, who have worked hard as a multidisciplinary team to diagnose and treat Amara. Amara’s treatment plan includes monthly IV Immunoglobulins and pulse steroids for the next year or so until she is ready to be weaned. She will also be tested for her B cells when they start to grow back to determine whether she will need additional Rituximab.

Over the last few months of receiving treatment, Amara has had to re-learn how to sit, crawl, stand, and walk again. Her family is beyond grateful to see her responding to treatment, even though the future is so uncertain. Seeing their baby able to run into their arms once again has been an indescribable joy to her family.

They hope Amara’s OMS journey is short, and that she barely remembers the battle she has had to face so early in life. They hope she continues to respond well to treatment, and that she is blessed with full neurological recovery and remission. They hope the neuroblastoma never grows back, and eagerly look forward to the day Amara can socialize with other children her age and attend school, with a healthy and strong immune system.

Through this whole journey, Amara has been her family’s guiding star. Her strength, spirit, resolve and resilience, as an 18-month-old, has been remarkable and unimaginable. While her family at times crumbled with exhaustion and sadness after hospital stays, Amara exudes nothing but joy and happiness when she returns home. She’s ever-curious to learn about her surroundings, and her resolve to continue to learn new things never fades. She gives us our strength. She brightens our world with her smile, every day.

Amara's family want others to know that every journey is different, but the support and camaraderie among parents of children with a chronic illness is strong. “Reach out to anyone who can act as a support, because the trauma we suffer as parents most likely remains with us, untreated,” said Bhavna, Amara’s mom. “Our village showed up bigger, stronger and larger than we ever expected when Amara became ill, and we gratefully leaned on our family and friends for support. Reach out to other parents, a support group, and anyone who offers to help, even if the task is minor. And most of all, be kind to yourselves while going through the journey as parents.”

To them, Alex’s Lemonade Stand Foundation (ALSF) has been a place to share their dreams of raising awareness for opsoclonus myoclonus syndrome, of growing the pool of research for this rare condition often associated with neuroblastomas, and for finding a cure (or early detection, or better treatment) for children with cancers. “It’s nice to have an approachable organization fighting alongside us, that is willing to listen to our stories.” They have received help in the form of free treatment guides from ALSF, and participated in the ALSF run for cancer as a family in 2021. They appreciate the connection to staff to hopefully create specialized research programs or increase funding for neuroblastomas and opsoclonus myoclonus syndrome for the sake of Amara and all kids with cancer.

Bhavna has shared this article for anyone who'd like to learn more about opsoclonus myoclonus syndrome.

Donate in Honor of Amara Today!