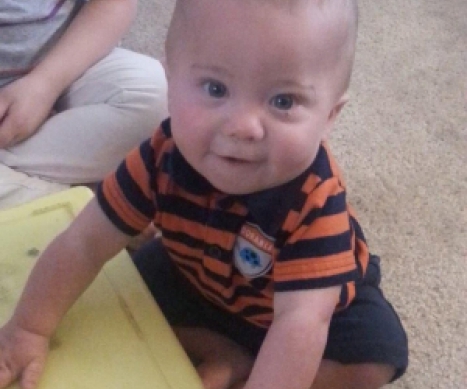 AJ is a sweet and smiley little boy. He hasn’t yet celebrated his first birthday but he’s already been through more than many people go through in a lifetime. He has been an amazing little boy throughout it all.

AJ was born six weeks early by emergency c-section and spent his first weeks in the NICU. When he was just three weeks old, he had a bone marrow biopsy and was diagnosed with acute myeloid leukemia (AML). A short time later he was transferred to the blood and bone marrow transplant unit. In total he spent the first three months of his life in the hospital.

In a mysterious twist, AJ’s AML went into spontaneous remission after the first bone marrow biopsy. He has not received any chemo or radiation except for one dose for the fluid around his spine and brain.

To this day, he has had five bone marrow biopsies done and will be having a sixth done sometime this summer. All of his biopsies after the first have come back clean. He has continuous blood work done every month and sees his oncologist every month. His family and friends hope that AJ will grow up and lead a healthy and productive life, and that one day we will have a cure for AML.

Hero Quote: “One day at a time. Miracles can and do happen.”

Donate in Honor of Andrew Today!