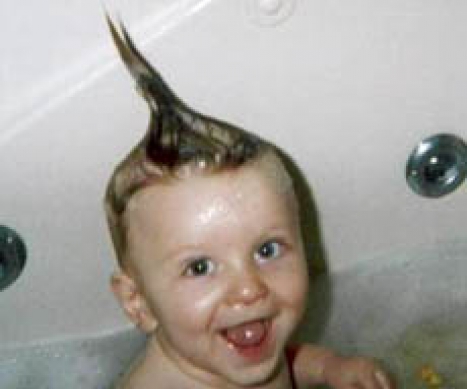 On September 4, 2003, we welcomed Anthony J. DeFord, Jr. into our family. He has a big sister named Nevada and a little sister named Kiersten, whom he never met. Anthony was a typical little boy; he loved his trucks, his Thomas trains, Elmo and candy. He especially loved Kit-Kats. Chocolate and candy were how we kept his weight up during treatments. He also loved his PopPop's motorcycle.

In March of 2005 he suddenly became ill. After several trips to the doctors he wasn't getting any better, so we took him to the emergency room at the Children’s Hospital of Philadelphia (CHOP). He was diagnosed with stage IV neuroblastoma. As a parent it is the worst news you could receive - that your child has cancer. Life as we knew it would never be the same as we started our emotional journey into childhood cancer.

Anthony started chemotherapy within a few days of being admitted to CHOP. He endured many procedures - chemo every 3 weeks, surgery and stem cell transplants. The whole time he remained a normal little boy, never showing signs of his illness. He ran, he jumped and most of all he loved hanging with his big sister whom he adored. He never looked or seemed sick except for his cute little bald head. When we were in-patient his doctors would look for him in the playroom because they would never find him in his room.

Anthony handled his treatment so well, just like a trooper and always smiling. Anthony had the brightest smile, the bluest eyes and the silliest giggle. He was 2 weeks into his second stem cell transplant when things took a turn for the worst and his liver began to fail due to treatment. On December 2, 2005, he passed away with his family at his side. He was only 2-years-old.

It is with his strength and courage that we continue on as a family and get through those tough days of missing him so much. During our journey we have learned to cherish the little things in life, the simple things that make us smile. We think of him everyday.

We would like to thank Alex's Lemonade Stand for their support and what they do every day to help families and find a cure.

We miss and love you Anthony.