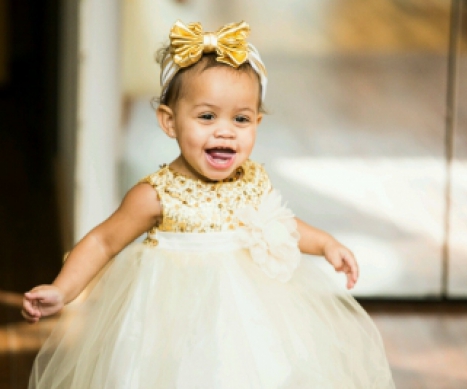 Get the facts about Juvenile Myelomonocytic Leukemia (JMML) and how our research projects are making a difference.

On October 15, 2014, Arianna Mae was born a beautiful healthy girl!

That didn't last long as Arianna always seemed to get sick. The excuse always given by the pediatrician was that Arianna was at daycare everyday where her mom worked. Chronic colds, bronchitis and pneumonia led to chronic asthma. Through all of this, Arianna was an incredibly happy, intelligent and sassy baby. Nothing held her back, which was why her behavior at the end of November 2015 was so alarming. Arianna wouldn't play. She wouldn't smile. She wouldn't eat. She would sleep all day. The pediatrician continued to suggest that Arianna just had a virus but her parents thankfully pushed for more answers. They finally got a blood test and how quickly things went from there. Arianna was diagnosed with Juvenile Myelomonocytic Leukemia, a very rare form of blood cancer, at just 14 months old. This type of cancer is so rare that the only cure is to undergo significant amounts of conditioning chemotherapy followed by a bone marrow transplant. Her family was blessed to find out that Arianna received several 100% unrelated donor matches. She handled chemotherapy well for the most part and went through what was called a "honeymoon phase" where she was doing pretty well post-transplant. Then once again, everything changed so quickly.

They found out that Arianna was allergic to the multivitamin, lipids, and trace elements in her IV nutrition, which caused her a great deal of discomfort and pain since they did not determine the allergy until after two weeks of suffering. The combination of allergies forced Arianna to be put on a bare minimum IV nutrition which caused her to develop several vitamin deficiencies including Vitamin B, Vitamin D, folic acid, fatty acids and more. Arianna also developed something called graft verse host disease (GVHD),a post-transplant complication that can be very life threatening. This disease happens when the donor cells start to attack each other and kill good donor cells. Because of the GVHD, Arianna had developed a blistering rash all over her body which most likely has caused permanent discoloration and scars. It has also caused severe inflammation and irritation in her stomach and intestines, which makes her sick several times a day. This prompted the doctors  to perform an endoscopy/colonoscopy, which later gave her a hematoma in the bottom of her stomach, obstructing her digestive tract. During this time, Arianna also had two visits to the pediatric intensive care unit after suffering severe dehydration and hypovolemic shock due to her severe vomiting and nutrition issues.  During this 12 week process, her family was blessed to find out that Arianna has 99% donor cells and is currently cancer free! Although this is what they came to CHOP for, they are still inpatient facing the many challenges that coincide with childhood cancer and the treatment she must endure. Arianna will beat this and she will thrive to once again become the happy, intelligent, sassy little girl her family once knew.

Donate in Honor of Arianna Today!