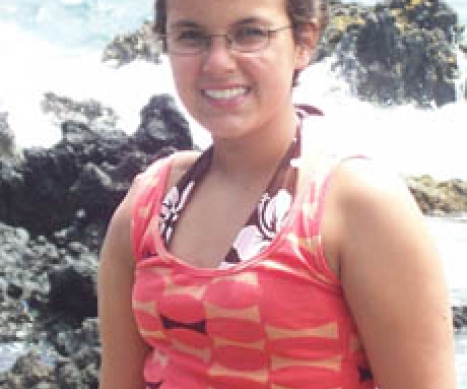 Ashlee Drouillard, a beautiful 13-year-old girl with an infectious smile, developed a lump on her right shoulder. Her doctor ran several tests and by June 25, 2007 they knew they were dealing with cancer. This was just the beginning of what her mother described as seemingly endless procedures, tests, pokes, surgeries, and hospital stays. Later that summer Ashlee was diagnosed with Synovial Sarcoma.

The treatment was chemotherapy, radiation and surgery mixed with Ashlee's constant smile and fighting spirit. This was a winning combination as Ashlee beat Sarcoma and was declared NED (No Evidence of Disease) in June of 2008. September brought a major milestone for Ashlee, the beginning of junior high. In December she began to have pain in her left side. On January 5, 2009 it was verified that Ashlee had relapsed, the Sarcoma had returned.

Those who knew and loved Ashlee would say that strength and courage is what she was. She did not give up the first time and would not do so the second either. More chemo and experimental treatments were tried, but this time the tumors would not respond. It began to be clear that Ashlee was nearing the end of her fight. Even in the face of these difficult times, Ashlee found joy and peace. She spent time with her family and friends creating memories. She dreamed the dreams that most young girls do. She dreamed of prom, boyfriends, driving, college, marriage, children and so much more. Showing the strength of their relationship, she shared these dreams, desires, and frustrations with her mom. Ashlee earned her well deserved angel wings on November 15, 2009.

When walking the road that Sarcoma patients travel, it is expected that a person wish for a cure, Ashlee was no different in this regard. What made Ashlee special was that she wanted a cure so that no person or their loved ones would have to experience what she had. Ashlee loved life, her friends and her family. It was very important to her that Childhood Cancer Awareness Month be properly celebrated so that everyone would know what the Gold Ribbons are for in September. Ashlee wanted a cure. Be inspired by Ashlee, be driven to fight in her memory. We need you to make a difference.  Together we can find a cure!

Donate in Honor of Ashlee Today!