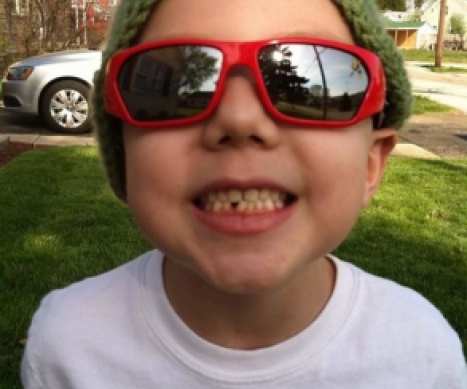 Ashton is a feisty 5-year-old boy who is full of life, despite having endured a great deal of grief and pain in his young life. Ashton's father passed away a few years ago and he struggled with that grief. His family planted a tree in his father's honor and before Ashton got sick, he would visit that tree when he was mad, sad or scared.

Ashton had been sick for a couple of months starting in the winter and spring of 2014. He had cold and flu-like symptoms and didn’t seem like himself. He was feverish, tired and pale with bags under his eyes. His mother took him to doctor after doctor, emergency room after emergency room, and while he was given a series of antibiotics, none of them helped. His mom finally took him to Dayton Children's Hospital and demanded an answer. The answer, when it came, stopped the breath of everyone in the family. Ashton had cancer - acute myeloid leukemia.

Ashton started chemo at Dayton's Children’s. While going through treatment, he met many wonderful friends from his neighborhood. Little kids showed up on his doorstep everyday wanting to play. There was a whole gang of them! The Phillipsburg Fire Department made him an honorary firefighter. The news showed up. He got a plaque and his name on the wall, which made him very happy. It was a moment that will never be erased from his family’s memories.

It became apparent that Ashton was not responding to treatment the way the doctors had hoped and his cancer was resistant to treatment. He had a bone marrow transplant at Cincinnati Children’s Hospital in August 2014. Unfortunately, Ashton developed Graft vs. Host Disease as a complication of the transplant. The disease affected his liver, lower intestine, skin and eyelids, and possibly his eyes.

Ashton has been in the PICU since he tested positive for GVHD and has barely opened his eyes since September 30, 2014.  A recent procedure was done to put lenses in his eyes to hopefully save them. He is being treated as a burn patient as close to 75% of his body is covered in blisters thus leaving him susceptible to sepsis and other very serious infections. He is on high doses of too many pain medications and antibiotics to count. One tiny piece of good news is that the little T-cells that are attacking his body also killed off all the cancer cells, so he's in remission. But he's far from being in the clear.

Ashton has developed a fungal pneumonia that has subsequently collapsed his left lung as well as an antibiotic-resistant bacterial infection. He's once again listed in critical condition. This all happened recently and we thought we were going to be saying goodbye. But, in the words of his oncologists, "He's Ashton. He keeps us on our toes and makes us work. He's not going anywhere."

Ashton’s family hopes he will be able to get back to being a kid. He is a huge Denver Broncos fan, athletically gifted, and loves Teenage Mutant Ninja Turtles, Ninjago, and Minecraft. He would really like to go to kindergarten.

Hero Quote:  “I love you to the moon and back.” - Ashton Carley-Trent

“I wanted you to see what real courage is, instead of getting the idea that courage is a man with a gun in his hand. It's when you know that you're licked before you begin but you begin anyway and you see it through no matter what. You rarely win, but sometimes you do." -Atticus Finch, To Kill a Mockingbird (posted by Ashton's older sister, Lily)

Donate in Honor of Ashton Today!