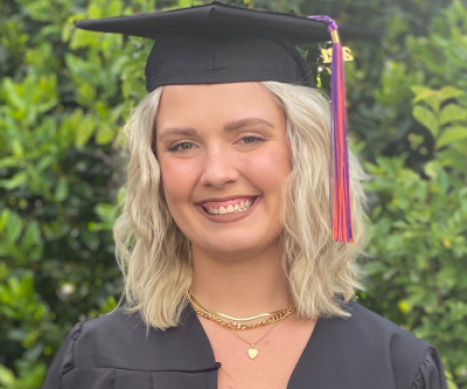 Camryn is a strong-willed and empathetic young woman who wants to spend her life helping kids through tough times. She recently graduated from Clemson University with a degree in recreational therapy and hopes of becoming a child life specialist. As a childhood cancer survivor, she knows what it’s like to struggle at such a young age, and after watching her little sister fight the same battle, it’s easy to see where Camryn found her inspiration.

Camryn was only 8 months old when she was diagnosed with stage I neuroblastoma. One day, while she was nursing, Camryn’s mom felt a mass in her daughter’s belly. When they took her to get checked out, doctors found a tumor on her abdominal aorta. She underwent surgery, and her tumor was successfully removed, but the battle wasn’t over.

When Camryn was 5, the tumor returned. Although it was benign this time, she underwent a second surgery to have it removed. Again, the procedure was a success, and this time, it didn’t come back. Camryn was lucky enough not to need additional treatment, but she still had regular testing to monitor her health. When she was 12, the oncologist finally released her, but a year later, Camryn’s younger sister, Emily, received a different cancer diagnosis. Emily’s journey required more time in treatment, but today, both girls no longer have evidence of the disease!

Now, Camryn is out of college and in search of her dream job. She’s happily engaged and will marry her fiancé in October 2021! Camryn’s mom, Angela, is beyond proud of her daughter’s success. She’s eager to see Camryn start pursue her dreams, get married, and maybe have children of her own someday. In the end, she just wants her daughter to be happy.

Having two cancer heroes in the family wasn’t easy, but Camryn and her sister are an inspiration to many. Angela admires her children for their resilience and how often they smiled through such tough times. She encourages other families not to let in negativity. Have hope. She found comfort by keeping God at the center of their lives and remembering that “He is in absolute control.”

Camryn’s family believes that Alex’s Lemonade Stand Foundation is a reason to have hope in a future with better research and kinder treatments. As Camryn moves onto her next big chapter, she is ready to lead a life of love, giving other families the kind of support she once needed.

Donate in Honor of Camryn Today!