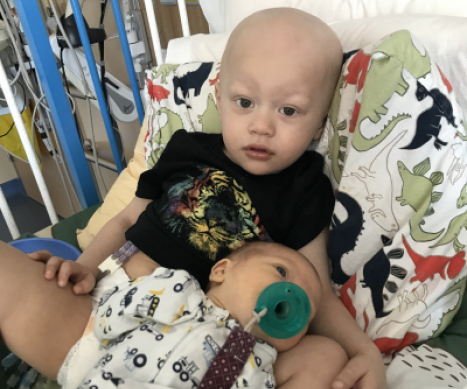 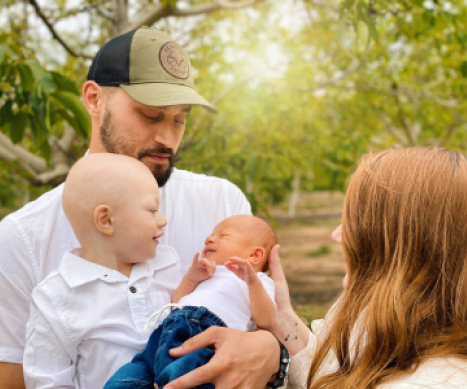 Carter is a spirited 2-year-old and musical genius on the rise. When he isn’t playing his CoComelon piano and drum set, he’s getting creative with his window markers or watching Spongebob. His love of dinosaurs is matched only by that for his new baby brother, Cassius. Despite Carter’s battle with stage IV neuroblastoma, he continues to be a fun and energetic little boy among his family.

In November 2020, Carter was playing when he accidentally ran into his dad’s knee belly-first. He seemed okay, but a small bruise appeared near his belly button the next day. After that was Thanksgiving, and strangely enough, Carter had lost his appetite and gained a low fever. While he was in the bath, his parents discovered more bruising around his belly button, and his stomach was getting bigger. When Carter couldn’t sleep, they took him to the emergency room, where bloodwork and an ultrasound revealed internal fluid buildup. An ambulance took them to UC Davis Medical Center for more testing and biopsies. Frightened, alone, and 24 weeks pregnant, Carter’s mom, Emily, had to break the news of their son’s diagnosis to his dad, TJ, who was waiting in the car outside the hospital for hours due to COVID restrictions.

Currently, Carter is receiving treatment at UCSF Benioff Children’s Hospital with a stem-cell transplant. Meanwhile, his parents have faced some professional setbacks. Emily quit her job to care for her sons, and TJ stepped down from his position at work to take on a part-time role conducive to the hospital’s visiting hours. Due to COVID-19 restrictions, Cassius can’t join them in the hospital, which means their family spends a lot of time apart.

With the pandemic, Carter’s family hasn’t been able to stay at the Ronald McDonald House, which means his dad often stays in a hotel provided by the hospital. The timing of Carter’s battle and Cassius’s birth have made it difficult for their family to spend quality time together and bond with the baby. Amidst their financial struggles, Carter’s family is grateful that Alex’s Lemonade Stand Foundation could provide them with grocery and gas cards to help out. Although they’re facing many trials, Carter and his family remain hopeful of a day when they can sit back and enjoy being at home together.

Donate in Honor of Carter Today!