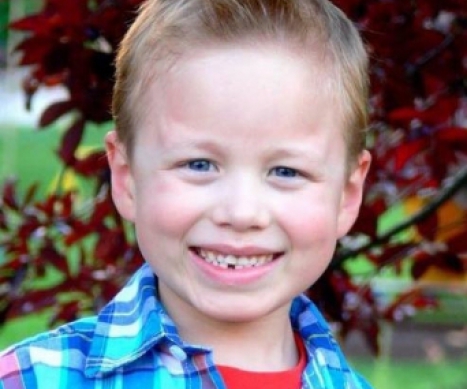 Conner is super sweet, sometimes soft spoken, funny 7 year-old boy. He is the youngest of three—with a 21 year old brother and a 19 year old sister. He loves sports, his family, going to football games and being a Wylie Bulldog.

Conner was diagnosed with Ewing sarcoma, a cancer that starts in the bones or the soft tissue surrounding the bones, when he was just 4 years old.

On January 21, 2013, Conner had a fever of 103.5. His parents took him to urgent care and he was diagnosed with an upper respiration infection. Six days later, he was diagnosed with strep. After he finished a 10-day course of antibiotics, Conner spiked another fever and ended up at urgent care having a chest x-ray to check for pneumonia. The X-ray revealed a spot on his upper left lung.

After admitted to the hospital and put on IV antibiotics to treat pneumonia, another x-ray revealed no shrinkage of the spot. A CT scan revealed that spot was really a mass, a tumor on his chest wall. Conner was care-flighted to Cook’s Children’s Medical Center in Fort Worth. Conner had surgery the next day. Surgeons discovered the mass was a small round blue cell tumor, which is indicative of Ewing’s Sarcoma.

Since his diagnosis, Conner has endured several surgeries, including a chest reconstruction after having two ribs removed, and is restricted from weight lifting.  He has had countless blood and platelet transfusions, 156 doses of six different chemotherapy medicines, hundreds of blood draws, over 30 scans and numerous overnights in the hospital.

When Conner was 5 years old and still in treatment, he said: “I just have cancer, for now.”

Conner’s aunt, Nancy, is supporting ALSF in Conner’s honor by jumping out of the sky!  You can learn more about her cool fundraiser here.

Donate in Honor of Conner Today!