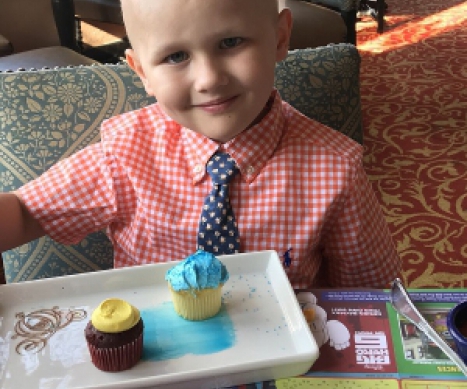 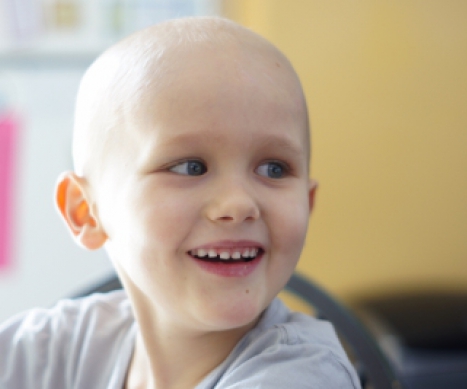 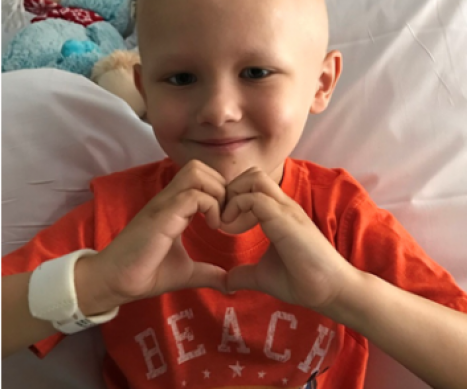 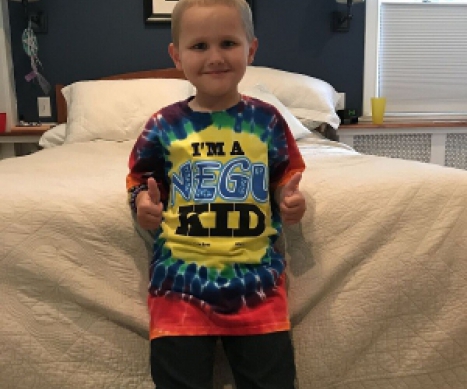 Cooper is kind, funny and engaged in everything he does. He loves playing baseball, running around with his sister and friends, hanging with the family, bowling and building Legos (ALL THE TIME!) Cooper has such an optimistic attitude. He would even say he loved going to chemotherapy because they had such good crafts and staying at the hospital was special because he had some good mommy and daddy time. Before and after every surgery, procedure and treatment, he would be armed with jokes to tell to brighten everyone’s day! Cooper is such a special boy and his resilience throughout his treatment is an inspiration.

Cooper’s childhood cancer story started in November 2016, when he suddenly felt sick during a road trip vacation. Upon returning home, Cooper had a rollercoaster of symptoms for 10 days that had him nauseous one day and feeling great the next, after a doctor visit his parents assumed it was a bug and it would run its course. Normalcy continued until December 9th when Cooper started acting out of character. Never one to complain-he refused to go to school because he was always dizzy, his head hurt and had a bit of an imbalance in his step.

Their first trip was to the pediatrician to see if his bug was back. Next, they went to the ophthalmologist thinking that his eyes were the cause of his symptoms and thinking (or hoping) that a nice pair of glasses would fix it. That’s when they discovered inflammation at his optic nerve caused by an increase of pressure. His mother’s heart sank as they headed to Children’s Hospital in Boston for an MRI.  Cooper’s dad was on his way back from out of town, trying to get back quickly. The MRI showed a growth near the base of his head, Cooper was then diagnosed with medulloblastoma. On December 13, he underwent a 10-hour surgery to remove the tumor. Cooper now refers to 13 as his lucky number as that was the day his brain tumor was removed!

The doctors were able to do a full resection of the mass, however Cooper was left with Posterior Fossa Syndrome (PFS), a condition that made him unable to walk, talk or swallow on his own. They moved into Spaudling Rehab in Charlestown, MA for the next three months. While receiving proton radiation at Massachusetts General Hospital, Cooper slowly regained his abilities through many hours of intense therapy each day. He then said his first words on February 5 - go Tom Brady! Returning home near the end of February 2017 had its challenges, as he started his nine rounds of chemotherapy that spanned into 2018. During these 15 months, there were many overnight stays at Boston Children’s Hospital, some were planned and some were surprises, as his body tried to combat the side effects of his treatment. Cooper attended school as much as his body would allow and his school/teachers were wonderful at making him feel a part of the class by Facetiming him during lessons. March 2018 marked the end of chemotherapy and the beginning of the next chapter of his journey.

Now Cooper is entering 2nd grade with a full head of hair and without his port and feeding tube. He would often refer to his port as his Iron Man device and after removing it, he still thinks of himself as a superhero - as does everyone else!

His family wants others affected by cancer to know that the journey is long but focusing on what is in front of you and trying to take it day by day can be helpful to manage the intensity. Finding support through family, friends and the community is critical and never say no to help! You are not alone! There are silver linings, you just have to look for them.

Alex’s Lemonade Stand Foundation (ALSF) helped early on by providing a treatment journal to help them keep track of everything. Then, near the end of treatment, they rediscovered ALSF as they shifted their focus to fundraising. They started the Closer to the Cure hero fund in honor of Cooper to support research specifically for medulloblastoma. They’re very appreciative of the opportunity to partner with a Foundation that can help bring the dollars they raise directly to researchers in a meaningful way.

Cooper's family is now holding the 1st Annual Closer to the Cure Bowlathon. 100% of the donations will go directly to medulloblastoma and pediatric brain tumor research through the ALSF Hero Fund Grant process.

Donate in Honor of Cooper Today!