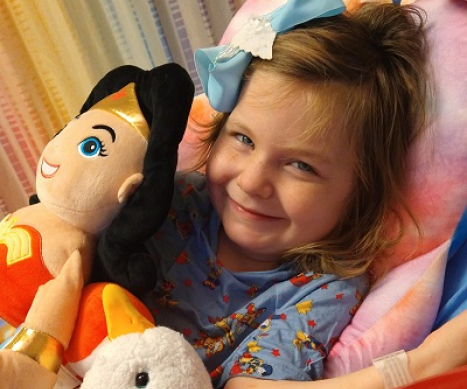 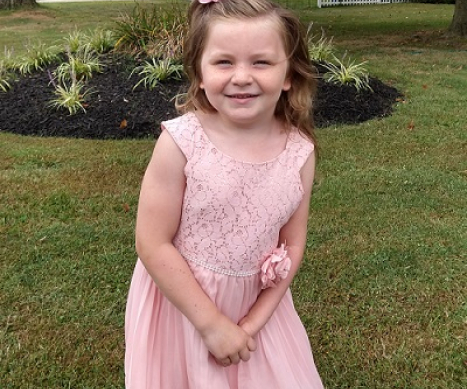 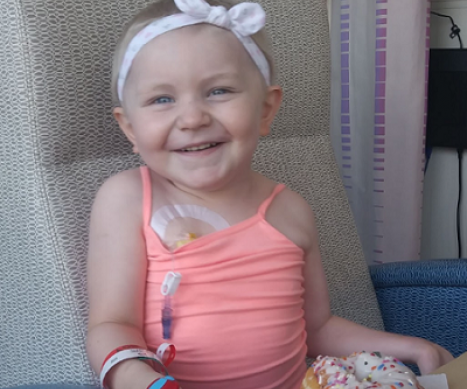 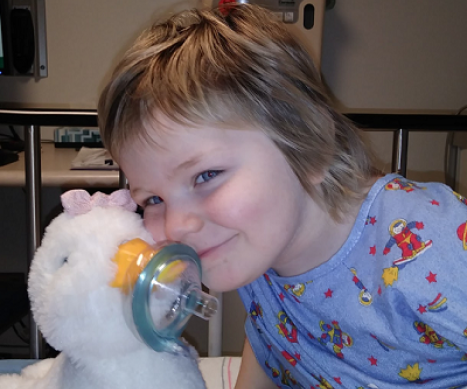 Don’t be fooled by Delaney’s captivating blue eyes – 6-year-old Delaney, called Laney by her loved ones, is a spunky little ball of fire that keeps her family on their toes! She loves pink, rainbows and glitter, and is fighting everything cancer has thrown at her with the strength of her favorite superheroes: Wonder Woman and the Power Rangers.

One day, Laney's left arm started itching so badly, she scratched until it bled. Six months later, her arm went limp. At first, her doctor suspected it was the cause of a stroke. But then an MRI scan showed the tip of a tumor on her spinal cord. She and her family were rushed to Children’s Hospital of Philadelphia, where Laney went into emergency removal surgery.

Since then, little Laney has endured three major and two minor surgeries, and two failed chemotherapy regiments with 63 counts of infusion. Although Laney had already gone through more than any child should have to, once her family learned that the tumor was intertwined with her spinal cord and chemo no longer an option, Laney had to go through 25 rounds of proton radiation. Because of the intensity and variety in treatment, Laney now has major left side deficits, and uses braces, including a wheelchair on some days. Today, she will be having additional procedures done to help with the swallowing issues she developed from radiation.

Despite all Laney has undergone, she gives her mom, Nicole, so much inspiration. Laney is still so happy and finds beauty in everything. Nicole also wants other families who might be facing a childhood cancer diagnosis to know, “There will be waves and some may knock you on your butt. Breathe. Forget the small stuff and get all the loving in. Keep your head up and focus to be there for your baby.”

To Nicole, Alex’s Lemonade Stand Foundation (ALSF) means happiness and hope – happiness in seeing how many people are involved, and hope that a cure for childhood cancer will be found. Before Laney was diagnosed, her brother held a lemonade stand to help kids with cancer. Today, Laney is taking matters into her own hands. She had her own lemonade stand in 2021 during ALSF’s Lemonade Days, which raised more than $3,000! You can donate to her 2022 Lemonade Days stand by clicking here!

“We were behind the fight back then and had no idea truly how much it would have an impact on our lives,” said Nicole.

Donate in Honor of Delaney Today!