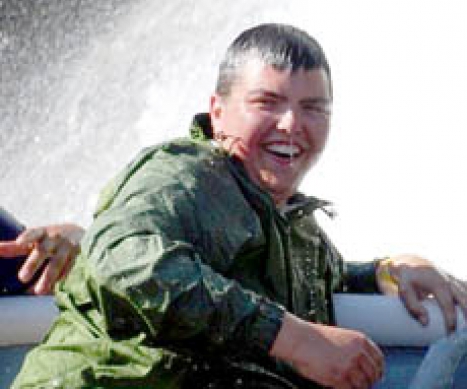 Derek Graffis was a normal, active high school senior looking forward to going to college when he was first diagnosed with Acute lymphoblastic leukemia (ALL) in March 2008.  We initially thought that his fatigue was due to a weird bug he might have picked up one year earlier when he was in Ethiopia with his high school youth group from the First Presbyterian Church of Bethlehem, but his cancer diagnosis was undeniable.  Derek immediately began intensive chemotherapy treatments at Lehigh Valley Hospital and the Pediatric Specialty Group, which was successful in achieving remission just prior to his high school graduation.  During the graduation ceremonies, he was recognized for having the highest number of volunteer and community service hours out of his senior class of over 800 students. Despite the side effects of his ongoing chemotherapy, Derek continued to move forward with his plans to become an Industrial Technology teacher by enrolling at Millersville University.  His ongoing chemo treatments caused him to miss his first semester of college, but he was able to start his college studies in January 2009.  He greatly enjoyed his classes and his professors, and was able to successfully complete his first semester.

2009 was a year of “fairly normal” activities for Derek, as he was able to resume many of his former activities, including a successful fall semester at Millersville University, albeit with daily chemotherapy and monthly clinic treatments.  That summer, he and his family were treated to a “trip of a lifetime” by Dream Come True and National Geographic, as they took an Alaskan cruise onboard one of the National Geographic expedition ships. Derek thoroughly enjoyed all the activities, especially kayaking among the icebergs and photographing whales, brown bears, sea lions and sea otters.

Unfortunately, Derek’s cancer returned in March 2010.  This time, his doctors recommended a bone marrow transplant to provide better odds for his long term survivability.  While Derek once again took on the intensive chemotherapy regimen to get his cancer into remission, the search began for a matching bone marrow donor.  None of his family members were a match, so with the help of Angel 34 Foundation, First Presbyterian Church and the National Marrow Donor Program, a bone marrow donor drive was held in his honor on May 1, 2010, with over 350 people agreeing to sign up to be life-saving donors.

Incredibly, on May 4, just a few days after this huge event, Derek found out that a “perfect genetic match” had been found for him, which he later found out was from someone in the Mountain Time Zone.

Derek went to Children’s Hospital of Philadelphia in mid-June for his bone marrow transplant, an invasive and scary procedure, but he never complained or questioned why he had to follow this difficult path.  His transplant was successful, and he was released from the hospital in late July.  He is currently recuperating at home with physical therapy and ongoing anti-rejection drug therapy.  He will not be able to attend his fall semester at Millersville, but plans to resume his studies in January 2011. Derek continues to show tremendous courage and optimism about his future, and he is certainly our hero.

Update: Sadly, Derek passed away in December of 2010.

Donate in Honor of Derek Today!