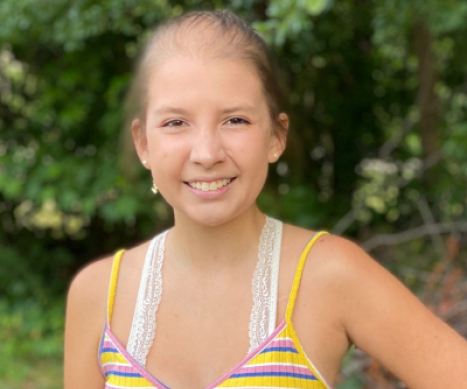 Emily is a headstrong and heartfelt young woman. After her journey with cancer, Emily has turned her kindness into action as a nursing student. Her dream is to work in pediatric oncology so she can fight alongside other children facing difficult diagnoses. Coming from a family with two childhood cancer heroes, it’s no wonder that Emily’s experiences influenced her aspirations.

At 11 years old, Emily began having debilitating headaches. Multiple sinus infection treatments proved ineffective, and eventually, she went to the emergency room for help. A CT scan revealed that the cause was a brain tumor. Emily was diagnosed with anaplastic medulloblastoma, and her family was shocked. Her older sister, Camryn, had overcome a different cancer as a child. Now, a year after Camryn’s oncologist released her from regular testing, Emily needed to begin treatment.

She soon underwent surgery to remove the tumor, followed by port placement. Emily received combined chemotherapy and radiation for six weeks. Afterward, she started doing in-patient chemotherapy on the first three days of every month. It took six more months before she completed the treatment, but eventually, there was no longer evidence of the disease.

Now, Emily is a college student, relentlessly pursuing her dream of caring for others the way they cared for her during treatment. Her mom, Angela, is so proud of her daughter’s accomplishments, but ever since her diagnosis, Emily’s spends a lot of time on her own or with her family. Angela hopes that Emily’s future is filled with love and friendship; she just wants her daughter be happy.

Having two cancer heroes in the family certainly wasn’t easy, but Emily and her sister are an inspiration to many. Angela was in awe of the strength and positivity her children displayed during such challenging times. She wants other families to know that it’s important to stay positive and remember that there is always hope. Angela found peace amidst the chaos by keeping God at the center of everything and reminding herself that “He is in absolute control.”

Emily's family feels hopeful that, with organizations like Alex's Lemonade Stand Foundation, there will be promising research and kinder treatment options in the future. When Emily was first diagnosed, her brother told their mom about a powerful experience. He said that God spoke to him with a promise that everything would be okay and Emily would lead a long life. Years later, Emily is cancer-free, leading a joyful and purposeful life.

Hero Quote: “I can do all this through him who gives me strength.” -Philippians 4:13 (Emily’s favorite Bible verse.)

Donate in Honor of Emily Today!