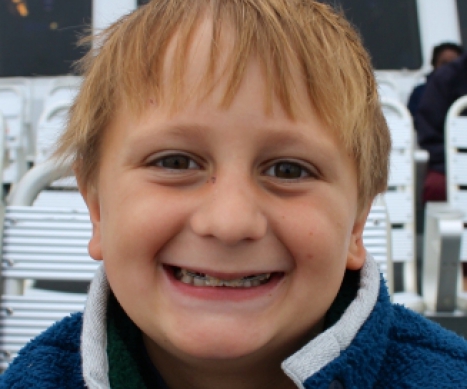 Jackson is a fearless seven-year-old who is full of life. He is an avid lover of sports, dinosaurs, and is a die-hard fan of the Washington Capitals. Jackson is our biggest hero and has more fans than most boys his age. He is the perfect role model for his siblings, Mason and Jillian, and gave us the greatest gift ever of parenthood.

On February 15, 2010, just days after turning two and a half, we noticed Jackson's gait was awkward and he had become very clumsy. After insisting he be seen that day by the pediatrician and having them voice great concern, we took him immediately to Children's National Medical Center. A CT scan was performed and confirmed our dreaded fears; Jackson had a mass on his brain stem.

Initially doctors were certain he had a brain stem glioma and delivered the news that is was likely terminal, yet Jackson's tumor showed two a-typical signs making the diagnosis unclear. Given this glimmer of hope that it was not terminal – we started chemotherapy before radiation in the hopes that his tumor would respond and prove to be a primitive neuroectodermal tumor (PNET), not a glioma, and just in a rare location. It responded and shrunk with each chemo round. It is now believed to be a PNET on the brain stem, which is extremely rare.

Jackson has finished six rounds of high dose chemotherapy and six weeks of proton beam radiation.  He is nearly five years post treatment and living a carefree, blissful life once again.  Jackson has continued to defy the odds and faces all secondary effects from treatment with bravery and grace. He is stronger than most men, a true fighter, and is destined to win this fight. Jackson continues to wow the doctors with his incredible progress.  This past February he was deemed CURED and rang the victory bell!

He has taught us more lessons than ever about the gift of life and all its simple pleasures. He has made us better friends, parents, and individuals. We are so grateful to be blessed with Jackson being our son and stand today true believers in miracles, the power of prayer, and divine interventions.

Jackson also hosted two lemonade stands himself, with the help of Calvary Children’s School, raising over $500 for ALSF. He too, wants to help make a difference in the pediatric cancer world and is hopeful for a cure to be found.

Donate in Honor of Jackson Today!